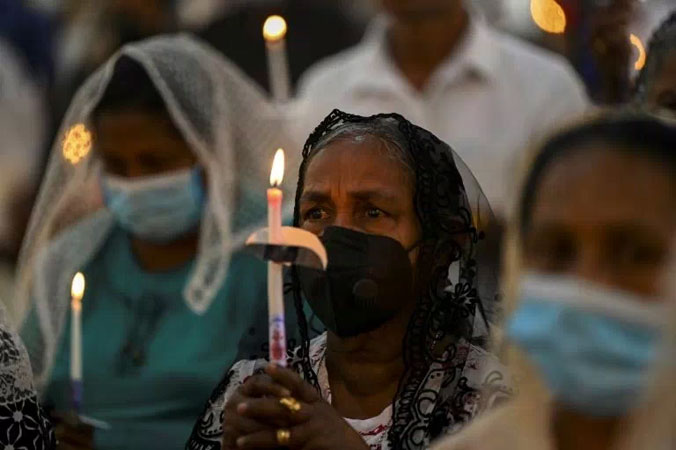 Sri Lanka’s Christians on Sunday honoured the 279 people killed in the 2019 Easter bombings as the island’s top Catholic leader warned of street protests unless those responsible were prosecuted.

Ranjith renewed his call for swift action against those responsible for the attack and said the then president Maithripala Sirisena should be prosecuted for criminal negligence in failing to prevent it.

An investigation ordered by Sirisena soon after the April 21, 2019, bombings found that he and his intelligence officials had precise information from India about the impending attack 17 days earlier, but failed to act.

“President Sirisena’s guilt has been identified in the commission report,” Ranjith told reporters outside the St. Anthony’s church. “I ask President Gotabaya Rajapaksa and his government why they are dragging their feet without prosecuting him.”

“We will take to the streets if no action is taken by April 21,” Ranjith said.

Rajapaksa came to power in November 2019 promising action against those responsible for the 2019 attack. Sirisena who did not offer himself for re-election is currently a legislator from Rajapaksa’s SLPP party.

Christians observed a two-minute silence from 8.45 am (3.15 GMT) when the first of seven bombers struck in the coordinated attacks. Each target had one bomber while at the Shangri-La hotel there were two suicide bombers.

Security was stepped up at churches across the Buddhist-majority country ahead of Easter Sunday services to guard against a repeat of the suicide bombings blamed on a local jihadist group.

Police spokesman Ajith Rohana said more than 12,500 armed constables were on duty outside 1,944 churches, and were backed by military personnel.

“We have also got the help the armed forces to patrol and reinforce police units across the country,” Rohana said.

Sri Lanka was shaken on Easter Sunday in 2019 when jihadists staged the largest single terror attack in the history of the country. The attack came 10 years after the end of its 37-year Tamil separatist war.

At least 279 people, including 45 foreign nationals, were killed in the attacks, and around 500 were wounded.

Police checked identity cards and bags before allowing people to attend the morning mass at St. Sebastian’s church north of the capital Colombo, where 115, including 37 children, were killed in the Easter attack.