* After the lockdown last year, many filmmakers were awaiting the release of their upcoming films in 2021 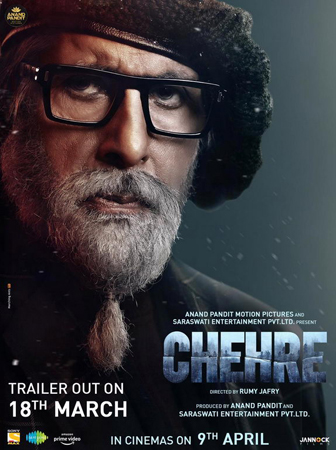 The much-talked-about film ‘Chehre’ featuring Amitabh Bachchan and Emraan Hashmi has been hogging the limelight ever since its inception.

But looks like movie buffs would have to wait a little longer to watch the film as it has been postponed amid the rising number of COVID-19 cases.

After the lockdown last year, many filmmakers were awaiting the release of their upcoming films in 2021. Even though the theatres and other establishments are functioning smoothly across the country, the sudden spike in COVID-19 cases is a matter of concern.

Considering the situation, the nation is going through and keeping the safety of fans in mind, the makers of the film have decided to postpone the release of the film.

Emraan shared the update on his Instagram handle along with an official statement.

He wrote, “The well-being of our very own audience is of utmost importance to us. We are extremely humbled by the love and support that we have received this far. See you in the cinemas soon. Until then, stay safe! – Team #Chehre.”

Considering the situation, the nation is going through and keeping the safety of fans in mind, the makers of the film have decided to postpone the release of the film

The statement began, “Due to the rising cases of COVID-19 and new guidelines for cinemas, we are unable to release our movie Chehre on 9th April and have decided to postpone until further notice.”

“We have received an overwhelming response on our trailer and we are grateful for all the love and support. We have decided to bring Chehre to audiences theatrically when the environment is more conducive for the experience,” the statement continued.

Stressing on the importance of wearing a mask and using a sanitiser, the team added in the statement, “See you in cinemas very soon, until then stay safe and healthy! Cover your Chehre with a mask and don’t forget to use sanitiser.”

Commenting on the decision to postpone the film, producer Anand Pandit said, “Considering the situation and safety of our audiences and fans which is of utmost importance to us, we have decided to postpone our film Chehre. The team has taken immense efforts to make it a great cinematic experience and we are looking forward to our audiences coming to the theatres safely.”

The trailer of the upcoming thriller was released on March 18. The intriguing trailer features Big B who plays a criminal lawyer and conducts a mock trial with friends in a cottage up on a snow-clad hill.

Emraan is given the role of the criminal. But soon, lines between reality and the game blurs as skeletons start stumbling out of the closet, taking a nail-biting turn. Rhea makes her appearance in the trailer in one blink-and-you-miss shot with Emraan.

The upcoming movie marks the first-ever collaboration between Emraan and Big B. The much-awaited mystery thriller narrates a story of polarized individuals fighting for justice against one crime. In the film, the audience will experience the ‘verbal conflict’ between Big B and Emraan.