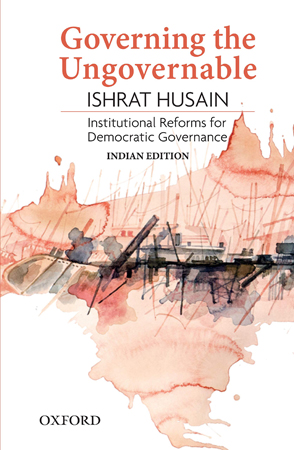 When a person performs any task, some questions arise in his or her mind.

That is why I am doing this job? And how am I going to do it? In the book, the author addresses some W-H questions. As a development economist, Dr Ishrat spent 20 years with the world bank. He began his career as a civil servant in Pakistan and later became the Governor of the Pakistan Central Bank. Then, in this book, he elaborated on Pakistan’s historical perspective, concluding that there is something very deep-rooted underpinning the quality of our economic outcome.

Why did Pakistan’s economic growth persistently plummet after the 1990s?

In the first 40 years after Independence, Pakistan faced the following six socioeconomic shocks, that exacerbated our economic growth after the ’90s.

ii) The influx of eight million refugees and then the poor country rehabilitates them.

iii) The third shock was the 1965 war with our big neighbour.

iv) The fourth shock was the separation of East-Pakistan in 1971.

vi) The sixth was the involvement in the war against the Soviet Union.

The shock of the aftermath caused our economic growth to plummet, falling from 6 percent to 4 percent. The economy recovered under military leadership from 2000 to 2008, but after 2008, growth slowed again, and our economy is now in dire straits.

What is the socio-economic contrast of the following two eras of Pakistan?

The author’s studies show the following five propositions for these two periods of contrast.

a) Terrorism/Extremism; Pakistan was a peaceful country in the early decades, with tourists from all over the world flocking to the country. However, due to militancy and extremism, Pakistan was recognized as a terrorist state by the International Community in the 1990s.

d) The fourth proposition was that Pakistan is a Garrison state, in which the military dictator decides everything that happens in the country and has a personal stake in it.

e) The fifth is too much expenditure is spending on defence despite education and health, so, defence crowd out health and education. But this is untrue because from the 1950s to the 1990s, only 7 percent of GDP was spent on defence.

What are the influencing factors that have an impact on our economic state?

The author presented two major studies on various developing countries undertaken by the IMF and the ADB, in which they discovered a link among the three factors listed below.

i) Quality of institution

These studies show the governance indicators data sets of India, Bangladesh, and Pakistan, which show the upward trend of India and Bangladesh in the performance of the indicator while Pakistan going downward in these indicators from 1990 to 2015.

Why is it important for developing countries like Pakistan to have good governance of their institutions?

Pakistan’s institutions, such as the Pakistan Industrial Development Corporation and the Pakistan Agricultural Development Corporation, performed marvellously in the early years of the country, from 1947 to 1990. They built Pakistan’s industrial base and were both strong export institutions. Pakistan exported six million tons of rice and other grains because we imported various seeds and fertilisers from around the world, which improved the entire agriculture and production sector.

WAPDA performed admirably, and PIA was one of the most successful airlines from 1950 to 1990. During the 1960s, civil services were free of political influence, but in the 1970s, Z.A. Bhutto bound and weakened them.

Dr Ishrat took 24-institutions in his study and stated that government should strengthen these institutions to improve governance because these are responsible for our security, growth, equity, and accountability.

Why author selected these 24-institutions to strengthen the governance? Because these institutions have a spillover effect on each other. For instance, if government hires a competent and prominent person as a chairman of FPSC and PPSC etc then he or she will select people purely on a merit base.

The writer is a research fellow at the Pakistan Institute of Development Economics. He can be reached at abdulqadir_18@pide.edu.pk