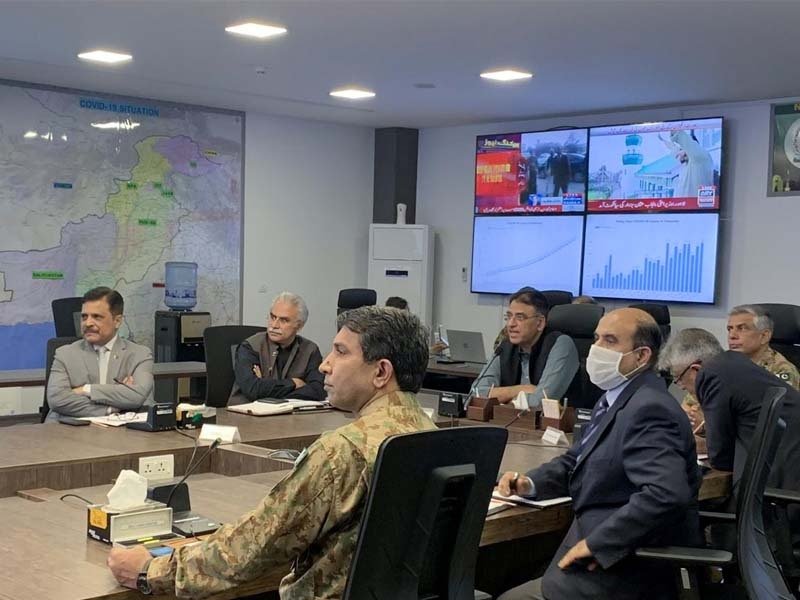 The National Command and Operation Center (NCOC) and all the federating units including that of Azad Jammu and Kashmir (AJK) and Gilgit Baltistan (GB) will implement high impact interventions in cities with over eight percent positivity ratio during the rising third wave of the pandemic till April 11.

The NCOC morning session held under the chairmanship of Federal Minister for Planning, Development and Special Initiatives Asad Umar, was attended by the chief secretaries of all provinces through video link on Monday. The forum expressed grave concern over current Covid-19 situation in the country and unanimously agreed for implementation of following high impact interventions in cities and districts with positivity ratio greater than eight percent (based on three-day rolling average) to contain the disease spread.

The forum decided that in cities with positivity less than eight percent, already imposed non-pharmaceutical interventions (NPIs or alternate measures to treat Covid-19 other than medical treatment) would continue to be enforced based on risk assessment and disease prevalence.

Furthermore, the forum also agreed to implement broader lockdowns with stringent enforcement protocols based on risk assessment. However, no mobility would be allowed in the restricted area except emergencies, it added.

The forum also agreed on closure of all type of indoor dining. However, outdoor dining was permitted till 10 pm along with takeaways. It also decided to implement closure of all commercial activities (less essential services) by 8 pm whereas two safe days per week would be observed (no commercial or business center to operate on these days). The choice of safe days has been placed at the discretion of federating units as per their requirement.

The forum also banned all sorts of indoor gatherings due to its super spreader nature in increasing disease prevalence. Moreover, the gatherings with upper limit of 300 persons were allowed with strict adherence of Covid-19 standard operating procedures (SOPs). “However, all types of indoor gatherings involving cultural, musical and religious or miscellaneous event will be banned,” it said.

The forum continued complete closure of cinemas and shrines with strict enforcement. The forum also imposed complete ban on contact sports, festivals, cultural and other events.

Keeping in view the disease prevalence, outdoor marriage functions were allowed till 10 p.m. with upper limit of 300 guests with strict adherence of the Covid SOPs (with event duration two hours only). It underscored that no indoor functions would be allowed. The forum also put complete closure of amusement parks, however, walking and jogging tracks would remain open with strict adherence of SOPs.

The forum and provinces also agreed that 50 percent work from home policy would continue (including all public and private offices and courts). In order to contain disease spread, the forum also decided to limit intercity public transport and allowed it to operate at 50 percent of its available capacity. However, rail service was allowed to operate at 70 percent of its capacity to contain disease transmission within the districts amid the third wave of the contagion.

The forum also decided with mutual consensus for compulsory mask wearing outdoors to be ensured by all federating units while incorporating innovative measures for enforcement. It also directed to ensure reduced presence at courts (city, district, high courts and Supreme Court) due to large gatherings of masses as a potential threat to increase disease proliferation. Owing to the impending season of tourism in the Northern Areas of the country, stringent protocols for tourism in GB, Khyber Pakhtunkhwa, AJK and tourist places elsewhere were directed to be enforced by the provinces. Moreover, sentinel testing sites at entry points or selected locations were to be established, it added.

Meanwhile, the national tally on Monday of total active Covid-19 cases was recorded at 33,070 with 3,669 more people testing positive for the deadly virus and 1,686 people recovering from the disease. Twenty corona patients died during past 24 hours, who were under treatment in hospitals, according to the latest update issued by the NCOC.