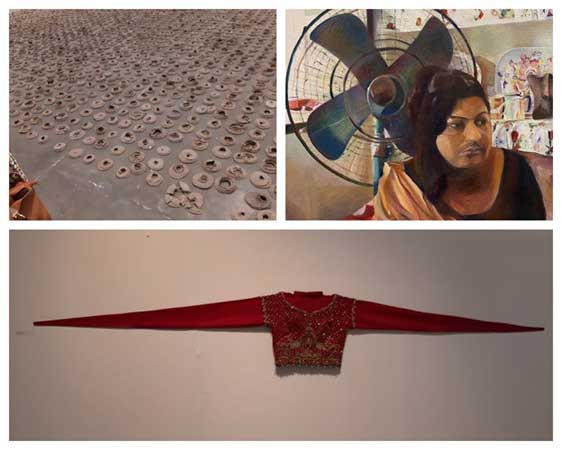 Amid coronavirus, the National College of Arts divulges a thesis degree show of brilliant artists. The artists demonstrated the fascinating artworks in diverse mediums and articulated their carefully chosen themes in an extra ordinary way.

Furthermore, few artworks were outstanding and here’s what the artist stated about her thesis displayed topic. The emerging artist Maryam Umar stated that her topic reflects how woman are labelled. Further she said that “When would we realize that being a female is not being less human? I am very much concerned about the role of a female and the impressions left on their existence by the society and relations around them. Being artists, we are concern citizens and have the right to create artworks dealing with the reality of life. Having such sensitive nature, we are directly affected by the laws and orders and inhuman actions taken by any group of people from our surroundings. Most of my works reflect domestic violence, inequality, cultural differences, injustice and series of social political events occurring in my region. The concept of radical transparency is much important in a relationship to make it successfully work. In most of the works, my conceptual concerns are derived from the unhealthy relationship I experienced and reflects its aftermaths in my practice. Some of the works critically question the perception of identity, race, domestic violence and hierarchy of gender politics. Using performing art, video installations, sculpture, wearable garments and walkthrough installations as my major mediums. My performances are never rehearsed and, in her opinion, they should not be, because a rehearsal can make an art performance look staged, rather it should be spontaneous and improvised on the spot. A spontaneous performance is always a surprise for the artist as well as for the viewer. The process of deconstruction and recreating new visuals through multiple mediums can be seen in my practice if one looks closely. I believe, as humans we go through this process of deconstruction and recreating our own self in many ways every day in our lives. And when one is living in a country with strong customs, traditions and cultural norms it is not easy to find the courage of raising your voice and stand strong against them.”

Furthermore, out of the ones that stood out, emerging artist Maryam Umar’s thesis displayed topic was one of them. She stated that her topic reflects how women are labelled

In addition, many outstanding exhibited their thesis, which were brilliant, such as Naqash Fakher who gradated as an architect along with Rameen Pasha, who’s work reflect the concept of normalizing the culture community of” transgender” through her perspective. She brilliantly, depict it and showed through her work.

Another brilliant emerging artist Durrie, who displayed her everyday life struggles, happiness in a still animation’s installation. She said that she paints images from daily routine and animate them to make viewers experience my work. In doing so, I attempt to understand how the brain reality even overrides the objective reality, by emphasising on its metaphysical aspects. By producing works like these, I have studied my own personality, where I recognize myself as an extremely introverted person who has always inspired by the idea of existentialism. I keep realising my relationship with objects on multiple levels, where it supports the idea that existence precedes essence. I animate all those spaces where I have spent time, deliberately following the complexity of simple objects, eloquent in nature and existing on their own. Above all, Durrie thinks that what we are is an outcome of how we choose to see what we see, interpret, make decisions, and most importantly, understand the existence of an entirely different entity. While creating an environment, a mood, a say, or in this case, a work of art, I endeavour to translate my imagination into reality. This reminds me of my relationship with objects and the meaning they attach to an individual being, without them knowing. Henceforth, I focus on my personal turned transpersonal experiences, in relation to the practicality of life. I have painted objects based on the dubious efficacy of reality and it being radically contingent. I just try to work with metaphors in relation to internal and external existential phenomena, by the vision of the mind, depicting my introversion. The NCA thesis is still on display until further notice, you can visit while, following all SOPs.

The writer is an independent curator based in Lahore. She can be reached at mahaaashraf27@gmail.com