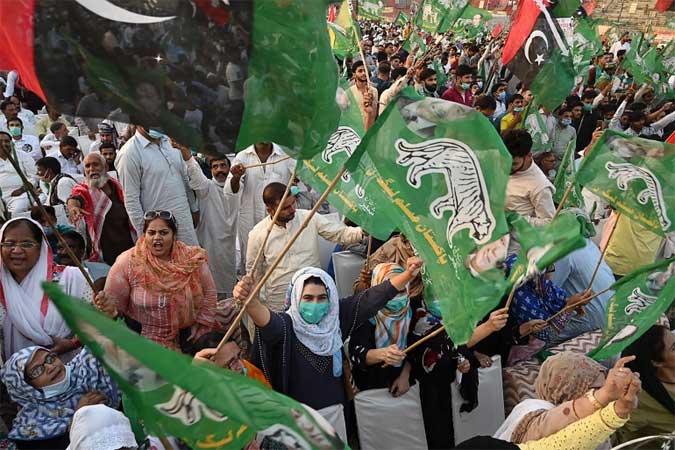 Leaders across the world are fighting for education and collective interests. They sacrifice careers for moral principles and regulations.

Leaders in Pakistan are fighting for personalities and personal interests – even if it means trampling some basic moral values such as honesty, truth, and personal integrity. The Pakistan Democratic Movement (PDM) – an alliance among those who have been after each other’s throats – epitomizes this subversion and disregard of some fundamental moral values. “Thief, dacoit, corrupt-to-core, Zardari, Sharif is the real son of dictator ZiaulHaq” are some of the titles these leaders have been using for one another.

The principle of course MUST apply to all ruling elites – including the military which claims a high moral ground and thus is under a greater obligation to stand scrutiny. And more importantly, those calling out the military establishment for distortions in the system, must themselves also demonstrate impeccable character to mobilise pressure for real change.

Boris Johnson, the UK Prime Minister, has vowed never to shut down schools again. German Chancellor Angela Merkel had made it clear very early on that the Covid-19 that “we cannot keep children in the dark” by keeping them out of school indefinitely.”

Here in Pakistan, our politicians turned covid-19 into a political issue. Many even sided with students who wanted to take exams online, refused in-person examination and went into a protest frenzy after told to appear for exams.

Political leadership gave in and asked even private universities to listen to the “democratic” demands of students, knowing well that the country already suffers from poor education standards. They also knew that students were looking for convenience i.e. ability to copy-paste or cheat. But SADLY this scoundrel attitude won and most exams were held online.

Elsewhere, politicians work to uphold law and their oath. Many often step down when caught cheating, lying or abusing authority. But here, these “attributes” have morphed into essential elements of our conversation – with little care about the morality of these “values.”

In Germany, an MP from Angela Merkel’s CDU party – Nikolas Löbel – announced on March 8 to leave the CDU party after it emerged that his firm had earned around €250,000 ($300,000) from sales of face masks during the pandemic.

So intense was the public pressure that within hours , Loebel resigned from the parliament too, although he had earlier announced to continue as an MP. Another lawmaker is facing pressure over a similar case.

Here, politicians- aided by maverick lawyers- defend even “illegalities” using constitutional and legal ambiguities with no remorse. Case study is Hamid Khan’s argument before the Supreme Court in the case relating to demolition of lawyers’ offices built on public land – car part and football ground. Khan, while defending the illegal structures, argued that even courts had been illegally built on private lands.

How can we grant a stay in favour of an illegally occupied land and a structure constructed thereupon, asked Chief Justice. Later, in a similar case, the registrar of the Islamabad High Court cited a letter of the district and sessions judge, confirming that “some encroachment has been made in the commercial area of F-8 Markaz. Some courts were illegally constructed on a plot owned by a private citizen, with no rent or compensation whatsoever to him. The Court therefor instructed the Capital Development Authority (CDA) remove the illegal encroachments made by the junior courts. Can some one imagine the judiciary as encroacher on private or public lands? In this case it happened, with construction in open, circulation areas of the F-8 Markaz. In one case, some lawyers truncated a steel ladder at the rear of a plaza – Emergency Exit for the plaza – and constructed their own office.

In all, over 300 so-called “chambers” had been constructed at the Football Ground as well as public car parking – even three storey- structures. Most of them had electrified these offices with illegal connections (kunda) from distribution boxes of IESCO.

Unfortunately, a number of top lawyers kept supporting and defending this gross illegality of their associates at F-8 i.e. illegal occupation of public land, electricity theft and high-handedness with local plaza owners.

They in fact mocked the law when relying on law to argue their cases in junior and senior courts.

Several politicians have also been involved in similar grabbing of public properties and assets in Islamabad, Lahore, Multan, Faisalabad, Gujranwala

What we witnessed before and after the Senate elections in Pakistan also testified to this selective approaches to law and morality.

One wonders for how long will common people keep absorbing lies, disinformation and frauds by top leaders?

Take former prime minister Shahid Khaqan Abbasi’s threat to a young, misguided and emotional PTI zealot. Totally understandable that PML-N leaders felt threatened , abused after having been mobbed by PTI supporters, who went over board in becoming physical with Dr.Musadiq Malik and Abbasi.

But Abbasi’s statement was equally unbecoming of a former PM; whoever wants to challenge me should step forward and I promise to send him on a stretcher from here.

With this, Abbasi stooped to the level of the young man who had lost his mind to emotions once Mariyam Aurangzeb repeatedly called out PM Imran Khan as “thief, dakoo and terrorist.”

How do national leaders distinguish themselves from teenage emotional, at times reckless college students? Ideally through restraint and calculated composed responses to hooliganism, and not with threats of physical mortification. How would they respond if their workers behaved the same way to punish detractors of their leaders? Justify or condemn? Offer apology if caught cheating and lying, or concoct more lies to defend u-turns? Pacify angry followers or incite further violence through provocative and intimidatory statements?

Or is morality and principled positions secondary to power politics in the Pakistani context?