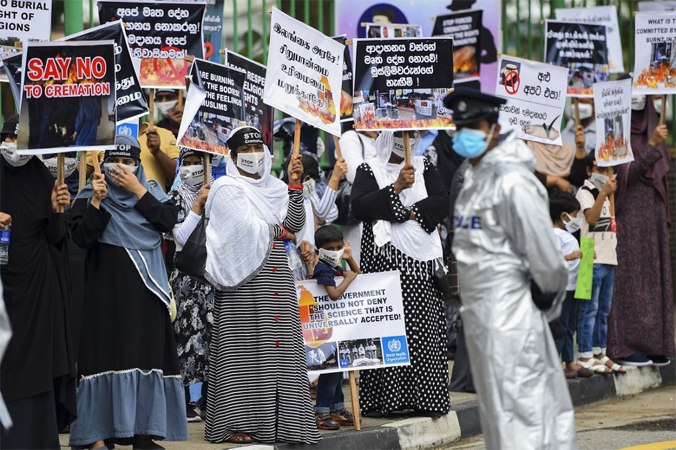 A plan by Sri Lanka to bury Muslim coronavirus victims on a remote islet was slammed on Wednesday by locals and the minority community. Colombo banned burials of Covid-19 victims in April, despite expert assurances they would not spread the virus, implementing a policy of forced cremations. Sri Lanka’s Muslims, who make up 10 percent of its 21 million people, challenged the policy, pointing out that cremations are forbidden under Islamic law. The policy was revoked last week after a visit from Pakistani Prime Minister Imran Khan, who urged Colombo to respect Muslims’ religious funeral rites. And on Tuesday, officials proposed burying Muslim virus victims on the remote islet of Iranaitivu, 8.6 miles (13 kilometres) off the country’s northern coast. That plan sparked protests from locals as well as from Muslim leaders. On Wednesday dozens of Tamil residents, led by Catholic priests, demonstrated in Kilinochchi, the nearest mainland district to Iranaitivu. They held banners saying the one-square-kilometre (0.4-square-mile) island should not be used as a “graveyard” for the pandemic.