* Chloé Zhao was named best director — becoming only the second female winner of the category in Globes history, after Barbra Streisand in 1983 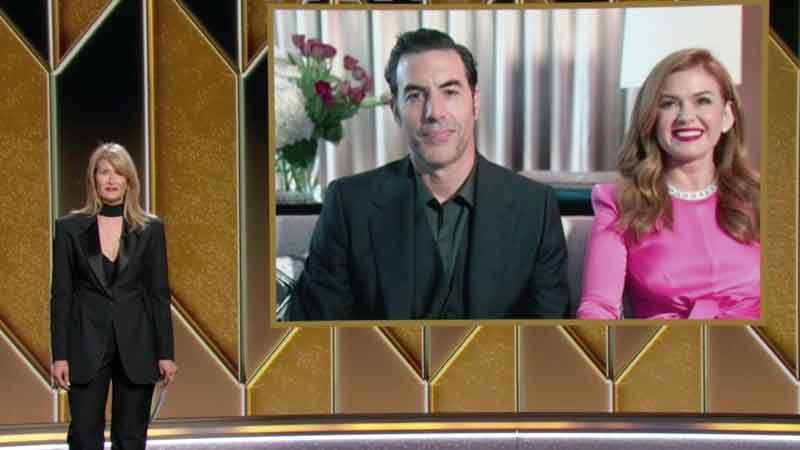 The night’s top prize – best drama film – went to Nomadland, which stars Frances McDormand as a homeless woman travelling through the American West. Chloé Zhao was named best director – becoming only the second female winner of the category in Globes history, after Barbra Streisand in 1983.

“Thank you everyone who made it possible to do what I love,” Zhao said.

“I fell in love with making movies and telling stories because it gave us a chance to laugh and cry together, to learn from each other, and to have more compassion for each other.”

“Thank you to the all-white Hollywood Foreign Press,” said Sacha Baron Cohen as he accepted the prize, referring to the recent revelation that the organisation behind the Globes currently has no black members.

‘Thank you everyone who made it possible to do what I love,’ Zhao said

Cohen poked further fun at the awards body as he was named best actor in a comedy or musical for the same film.

“Wait, Donald Trump is contesting the result. He’s claiming that a lot of dead people voted, which is a very rude thing to say about the HFPA,” he joked.

Borat and Nomadland were among several films to pick up two awards each. Of the night’s 14 acting winners, half were British, including Cohen; Rosamund Pike, who was named best actress in a musical or comedy film for I Care A Lot; and Daniel Kaluuya, who won best supporting actor for Judas and the Black Messiah.

Kaluuya plays US activist Fred Hampton, the chairman of the Black Panther Party, who was assassinated in 1969 at the age of 21.

“I hope generations after this can see how brilliantly he fought, he spoke, and he loved,” Kaluuya said as he accepted his prize.

“He taught me about myself, made me grow as a man, and I appreciate that with all my heart.”

“I’m so shocked. I’ve got trackie bottoms on and I’m comfortable but this is exciting,” Boyega joked as he accepted the award from home.

Logan shared a video on Instagram of himself reacting to the announcement and raising a celebratory glass. “You’re portrayal of me has been life changing,” he told Boyega in the accompanying post. “I’m also very proud of you & your name check on accepting the ?Golden Globes is so humbling.”?

The Crown was the big winner in the television categories, winning four prizes in total, including best drama series.

Josh O’Connor and Emma Corrin both won acting honours for their performances as Prince Charles and Princess Diana respectively.

As she accepted her prize, Corrin said: “Most of all, thank you so much to Diana, you have taught me compassion and empathy beyond any measure I could ever imagine.”

O’Connor said: “I’m very lucky to be able to work in this period, and there are so many people who are unable to work, who are alone and isolated, and I hope we can all collectively put mental health at the forefront our minds.”

Gillian Anderson was named best supporting actress for her portrayal of former prime minister Margaret Thatcher in the series.

Elsewhere, Chadwick Boseman was posthumously named best actor in a drama film for his performance in Ma Rainey’s Black Bottom.

His wife, Taylor Simone Ledward, accepted the award on his behalf, after the Black Panther star’s death last summer from colon cancer at the age of 43.

In one of the ceremony’s surprises, The United States vs Billie Holiday star Andra Day was named best actress in a drama film for her portrayal of the jazz singer.

Aaron Sorkin paid tribute to the three women who were nominated for best director as he accepted best screenplay for The Trial of the Chicago 7.

“You are the reason my college-age daughter wants to be a film-maker, and I’m never going to forgive you for that,” he joked.

Speaking before the ceremony, Regina King, who was nominated for her directorial debut One Night in Miami, said: “This was another year of powerful work from women with strong voices, so it feels good, and I hope this is the beginning of a true shift.”

Other winners included Mark Ruffalo for best actor in a limited series, and Pixar’s Soul, which won best animated film.

The ceremony, which recognises excellence in film and television, was held virtually this year because of the coronavirus pandemic.

While nominees dialled in from home, the live audience was made up of frontline workers and first responders of the Covid-19 pandemic.

The Golden Globes are the first major event of awards season, and often a good indicator of which films will go on to Oscar glory.

Former Saturday Night Live stars Tina Fey and Amy Poehler returned to hosting duties this year, but they were in New York and Los Angeles respectively, marking the first time the Golden Globes have been bicoastal.

The nominees and winners were voted for by the 87 members of the Hollywood Foreign Press Association (HFPA), a group of international journalists based in California.

After a recent investigation by the LA Times found the HFPA had no black members, representatives from the organisation said during the ceremony they planned to address the issue.

“Tonight, while we celebrate the work of artists from around the globe, we recognise we have our own work to do,” said Helen Hoehne, vice president of the HFPA.

“Just like in film and television, black representation is vital. We must have black journalists in our organisation.” But in separate letters to the HFPA and the Globes’ network sponsor NBC issued after the ceremony’s conclusion, Time’s Up president and CEO Tina Chen criticised the response as “cosmetic”.

“Change only occurs from an awareness of larger cultural problems, as well as a long-term commitment to systemic change”, she wrote.

Chen also called on NBC to take action and meet their public commitment to reform.

“As leaders of NBCUniversal television”, her letter read, “your power as stakeholders makes you an effective force of change.”

Veteran actress and activist Jane Fonda received the Cecil B DeMille Award for lifetime achievement and used her acceptance speech to mirror Chen’s sentiments – calling for greater diversity in the industry. The 83-year-old spoke of the importance of storytelling, saying powerful stories can “change our hearts and our minds”.

She said: “Let’s all of us make an effort to expand that tent so that everyone rises and everyone’s story has a chance to be seen and heard. Let’s be leaders.”