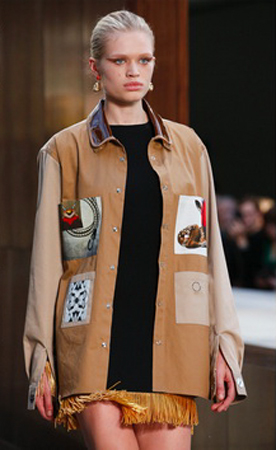 Burberry’s Riccardo Tisci said the dream of being able to explore – a freedom denied during COVID-19 lockdowns – had inspired his first menswear-focused collection for the British luxury label. “Enclosed indoors, I dreamt of the outdoors and its beauty, fuelled by the thought of the creativity that comes when we are together,” Tisci said on Monday. “With this dream in mind, I became fascinated by the widespread British craft and outdoor movements of the early 20th century, when people escaped to explore the unknown countryside.” Outerwear was a focus in the Autumn/Winter 2021 collection, filmed at Burberry’s flagship Regent Street store in central London before being released on social media channels on Monday. Burberry’s traditional trenches were re-imagined with pleats, panels and fringes, while the colour palette centred on tonal shades of beige, bark brown, oxblood burgundy and city greys. Tisci joined the 165-year-old brand in 2018 to give creative direction to chief executive Marco Gobbetti’s re-positioning of the house further upmarket. His designs have attracted new younger customers, particularly in the important Chinese market.