It wasn’t about dating, I always wanted to marry Iqra Aziz: Yasir Hussain

* 'I feel like it's every woman's desire to get an elaborate and well-thought-out proposal because that's what we've seen in films and fairytales,' Hussain said 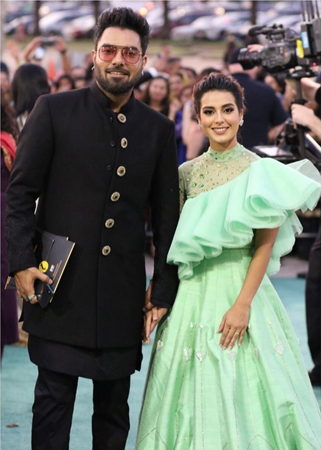 Yasir Hussain and Iqra Aziz are easily one of the more romantic celebrity couples we have and for good reason; the duo made headlines when Hussain proposed to Aziz at a major awards show.

Now, talking to Vasay Chaudhry on ARY Digital’s show Ghabrana Mana Hai, Hussain shared how the coincidence of him proposing to Aziz at an awards show came about after first meeting her at one.

He went on to cite another celebrity couple proposal that made headlines: singer Farhan Saeed proposed to actor Urwa Hocane at the Eiffel Tower in Paris!

“I feel like it’s every woman’s desire to get an elaborate and well-thought-out proposal because that’s what we’ve seen in films and fairy-tales. I was never a big believer in it, but over time I realized that if she wants that, it should happen,” said Hussain.

He went on to cite another celeb couple proposal that made headlines: singer Farhan Saeed proposed to actor Urwa Hocane at the Eiffel Tower in Paris!

Talk about the perfect match!

The two have been happily married since December 2019 now, and by the looks of it, are just as smitten as they were in 2019!