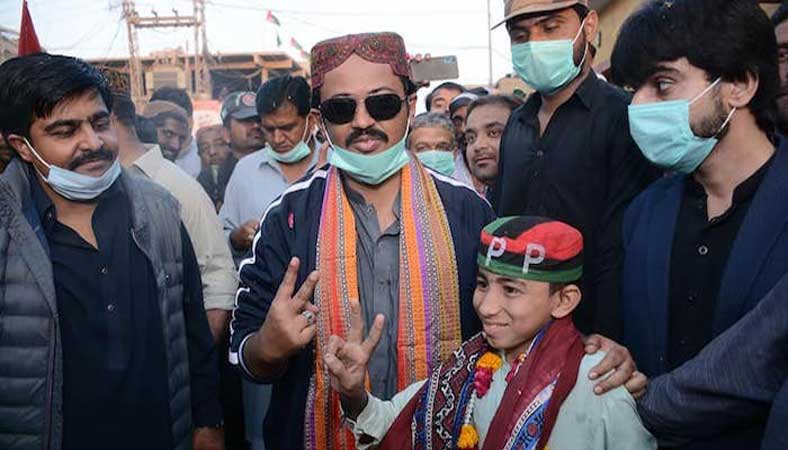 PPP candidate Amir Ali Shah was far ahead of his PTI rival in by-elections for NA-221 on Sunday. According to unofficial results collected from 200 polling stations, the PPP candidate had secured 78,771 votes while PTI candidate Nizamudin Rahimun had secured 32,546 votes, as per GEO News Channel at 10pm.

Out of 318 polling stations, 130 were declared extremely sensitive. Also, fire erupted at a polling station during by-election in Tharparkar’s NA-221 constituency.

Polling time for the NA-221 by-election in Tharparkar, where the PPP attempts to retain its seat against the PTI and 10 other candidates, ended peacefully and the counting of votes was currently underway by the time of filing of this report.

According to Tharparkar SSP Hassan Sardar Niazi, the “accidental” fire erupted at polling station no. 126 near Chachro town and “caused damage to some ballot papers and other material”. The official, however, refuted however, media reports that three persons had been detained for arson.

Meanwhile, the District Returning Officer Mian Mohammad Shahid said that the damaged ballot papers were quickly replaced and the polling process allowed to resume as soon as possible. He added that the polling process was conducted smoothly in the whole constituency, despite reports of scuffles between PTI and PPP voters in different areas.

Addressing a press conference in Chachro on Sunday, GDA MPA Abdul Razzak Rahimoo and PTI MNA Jai Prakash Lohana alleged that the PPP had defeated Makhdoom Shah Mehmood Qureshi through rigging in the 2013 elections and were doing the same this time. They added that the PPP was using government machinery, including the police, to carry out the rigging. On the other hand, the PPP lodged a written complaint to the ECP, alleging that the fire had been started at the polling station “by opponent group”. The letter added that “female voters were attacked and harassed” in Jase Jo Par village and asked the ECP to take notice of the incidents and ensure the conduct of free and fair elections in the constituency. On the other hand, PPP MPA Surendar Valasai claimed that PTI and GDA supporters were harassing their party’s voters just like they had attempted to do in Malir. The PPP candidate, Pir Ameer Ali Shah Jilani, too alleged that the PTI was using the federal government’s machinery to rig the elections.

He expressed these views while talking to the media after casting his vote at chachro main school polling station. He said that government machinery was being used ahead of conducting polls. He deplored that our voters were refrained to exercise their right to vote. PTI candidate Nizamuddin Rahimoon has alleged that a blast took place at a polling station in NA-221 Tharparkar constituency on Sunday, Geo News reported.

Rahimoon said in his statement that the blast took place at the Kesrar polling station “under police supervision”.

He said that Sindh police was helping his opponent under the supervision of the DSP. “My agents have been arrested and my voters are being chased away, but the people of Tharparkar will ensure that the truth wins,” he asserted.