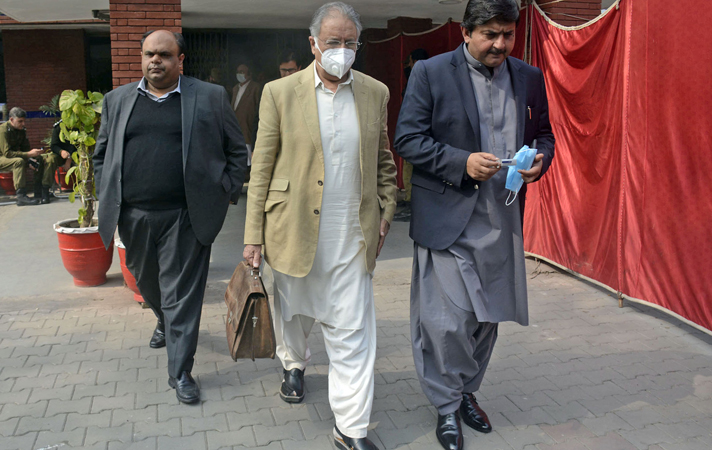 However, the nominations of former prime minister Yousuf Raza Gilani and Pakistan Tehreek-e-Insaf’s Faisal Vawda were accepted for the upcoming Senate elections.

The Pakistan Tehreek-e-Insaf challenged the nomination of the PML-N leader Pervaiz Rashid as a petition was filed by MPA Zainab Omar through her lawyer Rana Mudassar on January 17 in Lahore.

The petitioner contended that Rashid submitted nomination papers for the general seat, whereas the affidavit he submitted was for the seat of a technocrat. The PTI also alleged that Rashid had revealed national secrets and spoke against government institutions.

It further added that the PML-N leader was a defaulter of Rs9.5 million of payments owed to the Parliament Lodges. The petitioner maintained that Article 63-b of the Constitution was clear in this regard and thus disqualified the candidate from contesting any election. After hearing the arguments of the parties, the returning officer rejected Rashid’s nomination papers.

However, the PML-N leader has decided to challenge the rejection of his nomination papers and approach the election tribunal.

Likewise, the nomination papers for the women’s seat of PTI’s Neelam Irshad from Punjab were rejected.

On the other hand, the ECP accepted the nomination papers of Federal Minister for Water Resources Faisal Vawda who would contest the Senate elections from Sindh. Vawda, accompanied by his supporters, reached Sindh Election Commission in Karachi and went to the office of the returning officer. Lawyers petitioning against him tried entering the office but were barred by the ECP staff and the police upon which slogans were chanted The ECP accepted the nomination papers of former prime minister Yousuf Raza Gilani for the upcoming elections. The PPP leader served as the prime minister from 2008 till June 19, 2012, when the Supreme Court disqualified him for contempt of court.

According to the order, the candidate was convicted under Article 63(1)(g) of the Constitution of Islamic Republic of Pakistan. However, a period of five years has elapsed since his conviction and candidate stands qualified for contesting election to the Senate from the federal capital. “All the cases mentioned in the nomination papers are pending adjudication in different courts as such in the absence of conviction, a candidate cannot be barred from contesting elections as it is the basic principle of law that every person is innocent unless proven guilty,” the order stated.

“It may be noted that under Article 63 of the Constitution of Islamic Republic of Pakistan, there are certain disqualifications which are of temporary nature and a person disqualified under Article 63 can become qualified after lapse of certain period as mentioned therein,” the order quoted.

Four Senate election candidates contesting on technocrat and women’s reserved seats — two each — in Punjab were elected unopposed on Thursday.

According to the Punjab Election Commissioner, PTI’s Ali Zafar and PML-N’s Azam Nazir Tarar won the technocrats’ seat. PTI’s Dr Zarqa and PML-N’s Sadia Abbasi were also elected unopposed from Punjab for the women’s’ seats. The province’s election commissioner said that Abbasi was the covering candidate and was declared successful after Saira Tarar did not appear for her paper’s scrutiny.