Listening to Greta Thunberg: SDG 13 and a lot more

Perhaps if the older generation stopped dumping their existential angst on children maybe the world will start to prosper as the one world that is so often touted. As an FIR was cut from a certain country against the young Swedish activist Greta Thunberg, for expressing her viewpoints on global affairs, we wondered how the rest of the world was reacting to this one. She was also referred to as a “so-called’ activist and a ‘spoiled brat’. All this cuttingly came as a reaction for utilizing her influence on social media to speak on current affairs other than her own goal focus. A goal focus which has primarily been about global climate change. At age 18, Ms. Thunberg stands her ground well on many matters concerning current affairs as well as climate action. She is a true influencer and her speaking her mind about anything, should not be hushed.

What is interesting even more so is what propelled Ms. Thunberg to speak about world issues and current problems other than her own topic of interest. This actually has been a welcome step. Many young influencers have often been accused of speaking by ‘rote’ on what some say is given or ‘manufactured’ for them in the past. This has been the main point of contention for those who oppose the young influencers of the world. This new dimension, of independent thoughts, on utilizing influence to speak generally on world issues could be a good thing for all of us.

The average child of today has absorbed, dissected, and actively analyzed the problems presented much faster than of those born a few decades ago

Greta’ s demands about real zero emissions (by 2030 or 2050) have inspired nations and geared them into rethinking many things pertaining to the urgency of climate change. As a developing country, Pakistan, has a long road ahead to attain its goals. Yet in efforts for Sustainable Development Goals, it was one of the first countries to adopt the SDG agenda and the first to establish a Ministry of Climate Change (MOCC). Recognizing the youth population was also one of the mantras adopted by the current authorities, especially enhanced when youth-led activities laid the groundwork for winning an election in 2018. Fast forward to this year, we are trying to tap into the same youth population and setting grounds for several projects to safeguard our future. Many of the projects which are centered around the SDGs.

In the new world, it seems the children of today have become the spokespersons for many subjects which the world needs to pay attention to. And we say, ‘more power to them’! The world is made up of influencers on social media and the young millennials are quite knowledgeable about their concerns. Known for her efforts in openly challenging world leaders, Greta Thunberg has drawn much attention as well as unfairly been a target of negativity. However, we now find that even world leaders are recognizing that her concerns are correct- if not immediately possible to implement. But certainly, goal planning, strategies and projects have already started. Millions of people have followed suit in her footsteps to implement the changes or encourage their own world leaders to put into place actionable events to safeguard the earth. The Guardian newspaper, amongst others, named the phenomena as the “Greta Effect”.

Young influencers have sped up decision-making processes by acting as catalysts of the causes promulgated. Inspiring thousands around the world to follow in their steps to take vital actions which in turn hold decision makers to implement policies. Although they themselves have not made the policies, they certainly have gathered a momentum of large groups of people to look at things differently enough to do so. The new generation speaking out loud has also been a better sell to get people motivated for practical actions. Despite the age disconnect between generations, is it possible to delicately say we both need each other to balance each other out? The old generations bring experience, maturity, and a wealth of know-hows, whilst the younger bring fresh ideas that plug in innovation.

The average child of today has absorbed, dissected, and actively analyzed the problems presented much faster than of those born a few decades ago. With research to back it up they are also providing solutions-based dialogue with greater interaction, not just amongst themselves but across borders. Technology and information within a second’s reach, has greatly transformed mindsets and the brain power of the newer generation. The world’s problems are now literally in front of their faces as they grow up. This is what they know, so let us take their word for it that they are pivotal in active roles for change. Powerful wisdom and strength now coming, as the saying goes, ‘out of the mouth of babes.’

Let us also take them forward with amplifying their voices rather than trying to keep them quiet (they would not be listening to us on that one anyway). All of this is good information be it on climate change, education, human rights, current affairs, or any good governance mechanism which would influence their future. We may not necessarily need to accede to irrational unreasonable demands if not true, accurate, or simply unfeasible to implement. But perhaps, just to listen and understand would be a wise investment. In support of this one, we here on this side just say, ‘Stay strong Greta, the world is listening’.

The writer is known for her articles on cultural impact 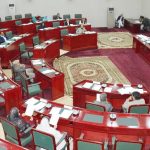