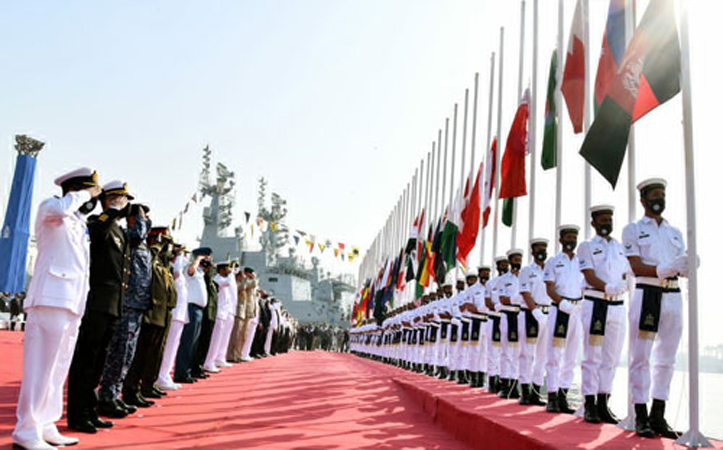 The official and impressive flag hoisting ceremony of the seventh edition of the multinational maritime exercise Aman-2021, which commenced in Karachi a day earlier, was performed on Friday.

Commander Pakistan Fleet Rear Admiral Naveed Ashraf was the chief guest of the ceremony while guests from seven allied countries also attended the ceremony as guests of honour.

During the main ceremony flags of all 45 participating countries were hoisted in the air with Pakistan’s flag in the middle and the Navy band playing the National Anthem of Pakistan.

As per the message, the naval chief welcomed the participating countries of the exercise and said participation from so many countries really describes the motto of the exercise which is ‘Together for Peace’. He said that Pakistan Navy is ever ready to play a positive role for the peace in the region.

The naval chief in his message said Pakistan Navy has taken several initiatives for maritime security and promote peace in the waters of the region.

He said one such initiative is Regional Maritime Security Patrol (RMSP) to make the waters safe for maritime activities and keep a check on all the illegal activities.

Admiral Mohammad Amjad Khan Niazi said these exercises are a clear message to all the peace loving countries to come together for peace. He hoped that camaraderie expressed here will continue in the future.

Addressing the ceremony, chief guest of the ceremony Commander Pakistan Fleet Admiral Naveed Ashraf said that the exercise aims to promote the security and stability in the region and keep the maritime environment safe from threats.

He said the exercise has two phases, a harbour phase and a sea phase while an international level conference is also part of the event to explore the development of the blue economy.

It may be pointed out that the 6-days exercise is being carried out in the form of collaboration between the navies of various countries to maintain a safe and sustainable maritime realm and enhance interoperability between regional and extra-regional navies. The exercise is conducted by the Pakistan Navy after every two years with a resolve against terrorism and piracy.