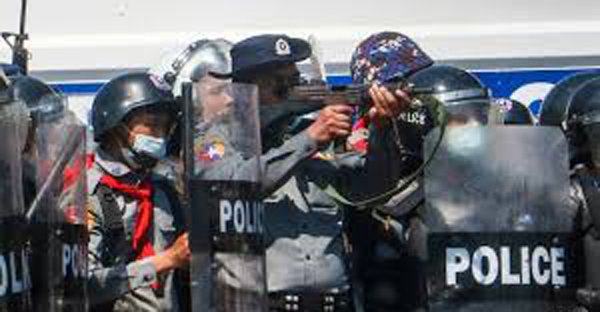 Myanmar’s military tightened its post-coup grip on power, stepping up a campaign of intimidation against the ousted civilian leadership while pushing harsher tactics as a fifth consecutive day of nationwide demonstrations began on Wednesday.

Soldiers raided and ransacked the headquarters of detained leader Aung San Suu Kyi’s party on Tuesday night, after police shot water cannon, tear gas and rubber bullets in a sudden escalation of force against the protests sweeping the country.

A doctor in Naypyidaw also confirmed the use of live rounds that left two people critically injured, but footage showed protesters in the capital were undeterred, returning to a blockade on a major highway on Wednesday morning.

Condemning the use of force, United Nations special rapporteur Tom Andrews said the police fire had injured a young woman, images of whom have spread like wildfire online alongside expressions of grief and fury.

“They can shoot a young woman but they can’t steal the hope & resolve of a determined people,” the human rights envoy wrote on Wednesday. “The world stands in solidarity with the protesters of Myanmar.”

The woman, who was shot in the head, remains “in critical condition” at the ICU, the doctor told AFP. In Mandalay, the country’s cultural capital and the seat of Myanmar’s pre-colonial monarchy, witnesses saw security forces fire tear gas directly at protesters waving the red flags of Suu Kyi’s National League for Democracy (NLD).