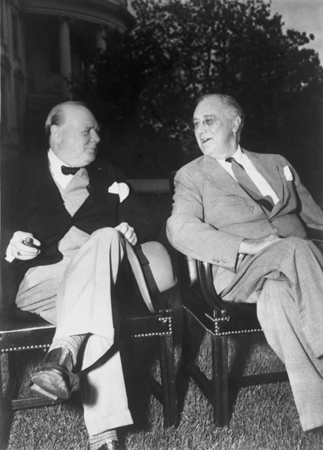 A historic painting that Angelina Jolie and Brad Pitt bought during their marriage is expected to fetch between $2.1 million to $3.4 million at auction next month.

Christie’s will sell the landscape, painted by then British Prime Minister Winston Churchill, as part of a modern British art event on March 1. Amateur painter Churchill gave the piece, called Tower of the Koutoubia Mosque, to U.S. President Franklin Delano Roosevelt as a souvenir of their time together attending the Casablanca Conference, then visiting nearby Marrakech, in January 1943. It was there that the two world leaders discussed their plan to defeat the Nazis in World War II. Churchill painted an estimated 500 paintings, but this is the only one he did during the war years.

After Roosevelt died in 1945, the painting was sold by the president’s son and changed hands several times before Pitt and Jolie scooped it up in 2011. The A-listers split in 2016, and the work is now part of the Jolie Family Collection, which is offering it.

Nick Orchard, who oversees modern British art at Christie’s, said the piece is “probably [Churchill’s] most important work.” And that’s before adding in the Brangelina factor.Since Pitt and Jolie’s breakup in 2016, they’ve battled in court over the division of their assets, which include some incredible works of art. The two were officially declared single again in 2019, but they continue to hash out the details of their divorce.“I wanted it to be close to their dad, who is only five minutes away,” Jolie said of the home. “I felt a little pressure moving in. Like I had snuck into where DeMille and [Charlie] Chaplin would hang out. I love most that there is no entertainment room, but lots of pathways and places to walk and think. I feel very fortunate we have that at this time.”

The director and Oscar-winning actress offered a glimpse into what pandemic life has been like for the family.

“We went into it having just gotten out of the hospital with Zahara [who underwent surgery last year], and we were so happy she was OK that we entered lockdown in a different state of mind,” Jolie said. “But, you know, there are also these other markers of life: Pax going into his senior year, but not being able to enjoy all that it is to be a senior; Zahara finally getting her driving license, but she’s taking the test with the driver wrapped in the full outfit with the masks. It’s not how you imagine these moments. But birthdays go on, and I think that for many people, it’s made us all feel very human together. There’s something beautiful about that.”