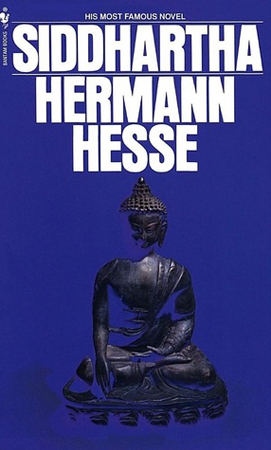 Siddhartha is a novel written by “Herman Hesse”. This novel deals with the spiritual journey of self discovery of a man named “Siddhartha” during the time of the Gautama Buddha. It is the ninth novel of Herman Hesse which is written in German with a simple and lyrical styles. It was published in U.S in 1951 and became very influential during 1960s. It is translated by Hilda Rosnar in 1951. It is contains 120 pages. Hermann Karl Hesse (2 July 1877 – 9 August 1962) was a German-born Swiss poet, novelist, and painter. His best-known works include Demian, Steppenwolf, Siddhartha, and The Glass Bead Game, each of which explore an individual’s search for originality, self-discovery and spirituality. Once, I started to use the wording of the novel, I really began to love its beautiful insights. Siddhartha starts out a bit arrogant and annoying making him highly unrelatable, but on his journey he discovers his imperfections, and I really grew to like his character.

His journey starts as a Brahmin but he quickly decides to leave his family to become a Samana which is a traveling ascetic. Here he learns three great skills. To think, wait, and fast. Next, he meets the Buddha where he learns that nothing can be taught without learning it for oneself. It isn’t until he meets a beautiful woman named Kamala, that I really became interested in his journey. From her, he learns the art of love. That makes it so interesting that she will only date a rich man, and so he begins to work as a trader.

During this time, Siddhartha falls into the trap of greed and materialism. It’s refreshing to see that a man who has spent his whole life trying to find the route to happiness could also get trapped by simple things like money. Having worked in the fashion industry, this chapter I really like the most. Being consumed by the things that are meaningless that can happen to anyone. By the time Siddhartha has learned all the river’s lessons, Vasudeva announces that he is through with his life at the river. He retires into the forest, leaving Siddhartha to be the ferryman.

This book is most about his journey to find peace, his last two chapters which are full of wisdom. He has to pick himself up from his lowest moment and start over, except he isn’t really starting over because he has learned something from every experience in his life that has brought him to this dark place. It’s a beautiful reminder that no time is wasted and that there’s no such thing as moving backwards in life.

I recommend this book to anyone who has been on a journey for themselves. To read about each stage of his life, what he learned, and how he found inner peace was really profound. It showed me that there are no wrong paths in life, and each road brings you where you are supposed to be. I really loved to read this book and it is full of wisdom about enlightenment.