Biden tries to show US as democracy beacon post-Capitol riot 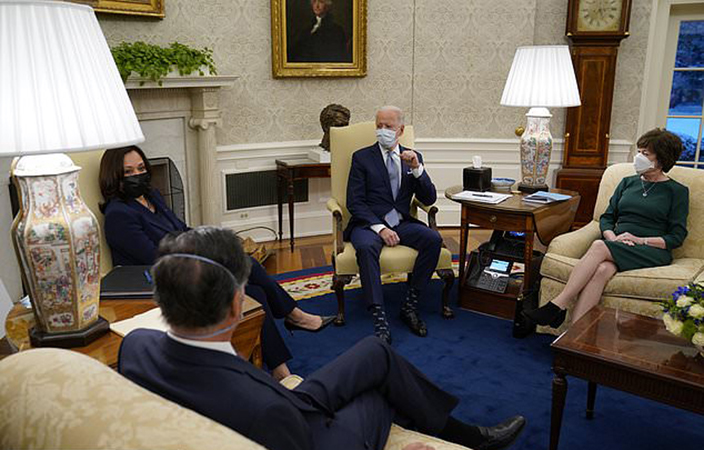 Less than two weeks in office, President Joe Biden is facing two critical tests of whether the deadly riot at the US Capitol has damaged America´s standing as a beacon for democracy.

Protests in Russia and a military coup in Myanmar come as American credibility on the world stage has plummeted after last month´s storming of the Capitol by a pro-Donald Trump mob looking to stop the certification of Biden´s election victory.

That adds to the weight on Biden as he seeks to fulfill a campaign pledge to dramatically reposition the US as a global leader following four years of a Trump foreign policy driven by an “America First” mantra. That policy was marked by the frequent disparagement of democratic allies and the occasional embrace of authoritarian leaders.

“I think there´s no doubt that the attack on our own democracy on Jan. 6 creates an even greater challenge for us to be carrying the banner of democracy and freedom and human rights around the world because, for sure, people in other countries are saying to us, `Well, why don´t you look at yourselves first?´” the secretary of state said in an interview with NBC News.

Blinken added, “The difference, though, between us and so many other countries is that when we are challenged, including when we challenge ourselves – we´re doing it in full daylight with full transparency.”

Biden, in the early days of his presidency, has sought to send the message in a series of calls with foreign leaders that America is back.

He´s reassured Japanese Prime Minister Yoshihide Suga that the US has its support in an ongoing territorial dispute with China over islets in the East China Sea. He’s sought to reset the relationship with Canadian Prime Minister Justin Trudeau, who was belittled by Trump as “dishonest & weak.” And he’s told Mexican President Andrés Manuel López Obrador that the US would send $4 billion to help development in Honduras, El Salvador and Guatemala – nations whose hardships have spawned tides of migration through Mexico toward the United States.

“The United States remains a country in the world that is looked to for leadership,” White House press secretary Jen Psaki told reporters. “It´s going to take some time, but he´s certainly committed to doing that.”

But the crises in Myanmar and Russia present Biden with difficult tests of his promise to reestablish global leadership that are likely to be far more complicated than mending fences with traditional allies.

Biden on Monday threatened to slap new sanctions on Myanmar after a coup that saw the military arrest the civilian leaders of its government, calling the episode “a direct assault on the country´s transition to democracy and the rule of law.”

In his first call with Russian President Vladimir Putin as counterparts last week, Biden raised concerns about the detention of Russian opposition leader Alexei Navalny and the crackdown on supporters backing his arrest. The mass arrests have only accelerated in the days since the two leaders spoke as protests have continued across the country.

“For Putin, he looks at the Capitol riot and sees it as more evidence of his worldview, a continuation of the degradation of liberalism in the world,” said Michael McFaul, who served as US ambassador to Russia in the Obama administration. “The Biden election doesn’t mean much to him about his theory about liberal democracy. Whereas Putin’s opponents are very encouraged by the election of President Biden because it shows that American democratic institutions were resilient.”

To that end, Navalny’s supporters wrote to Biden over the weekend urging him to take meaningful action with sanctions against members of Putin’s inner circle to demonstrate that he’s serious about reclaiming the US role as a champion of democracy.

Rep. Adam Schiff, a California Democrat and chair of the House Intelligence Committee, drew a line from Trump to the coup in Myanmar. Trump had made baseless accusations of widespread voter fraud that were rejected by multiple courts as well as Trump’s own Justice Department.

An announcement read on Myanmar’s military-owned Myawaddy TV explained that the seizure was necessary because the government had not acted on the military´s unsubstantiated claims of fraud in the Southeast Asian nation´s recent elections and because it allowed the election to go ahead despite the coronavirus pandemic.