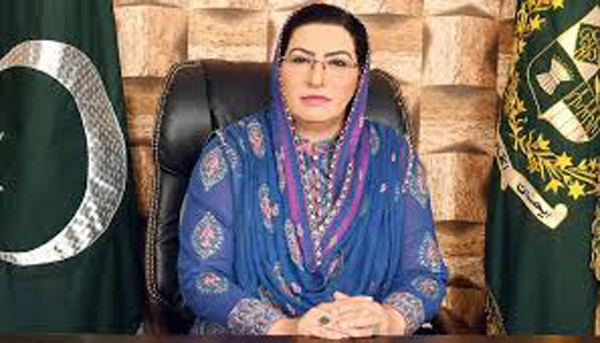 Special Assistant to Chief Minister on Information Dr Firdous Ashiq Awan has said that modern technology is being introduced in the land record centres to keep the system smooth and transparent.

Addressing a press conference along Punjab Minister for Revenue Col (retd) Malik Mohammad Anwar on Wednesday, Firdous said that the Punjab government is committed to facilitating the masses and has created ease in the lives of the people by providing prompt and easy access to land records. She said that good governance, transparency and provision of better facilities to masses are the top priorities of the government.

She said the Sharif family fraudulently transferred hundreds of acres of land, mostly in the name of its family members, adding that the Sharif family changed the master plan of Lahore and purchased land worth billions of rupees at cheap rates. She alleged that Sharif family marked the beginning of corruption in Pakistan and was behind every big scandal.

Shehbaz Sharif snatched the valuable agricultural land of poor farmers to establish residential colonies, she further said. She said that Punjab, known as the food basket of Pakistan, was looted in the name of industrialisation.

The special assistant said that the PTI government is taking pragmatic steps to promote agriculture, besides setting up 13 special economic zones. She said previously, the revenue officers used to take bribes instead of generating revenue for the state, adding that the PTI government has retrieved 140,000 acres of land from illegal occupation. She said the revenue department collected 46% more revenue as compared to previous year. The special assistant said as Chairman Kashmir Committee, Maulana Fazalur Rehman never set out to conquer Kashmir and today he has set out to conquer Rawalpindi. She said the Prime Minister Imran Khan has waged an arduous struggle against the menace of corruption, adding that accountability of looters is imperative. The corrupt elements have been helpless in front of the prescient leader like Imran Khan, she added. She said that those who are chanting hollow slogans today had emptied the national exchequer in the past and escaped the country by entering into expensive agreements and deals for LNG and electricity.

Answering a question on the increase in electricity tariff, the special assistant said that the government is bound to respect international agreements signed during the previous regime.

He said the urban digitalisation system is being introduced with the support of the World Bank, adding that the registry system has been computerized in 100 tehsils.