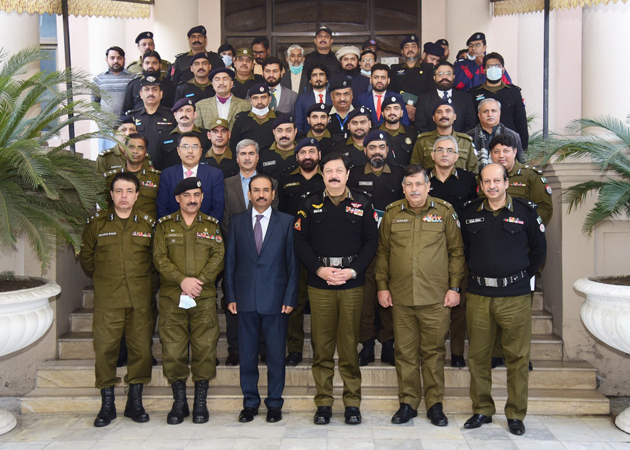 Inspector General of Punjab Police Inam Ghani said that it is the good tradition of the Punjab Police to inspire the officers and personnel who have shown exemplary courage, bravery and sense of duty while discharging their duties. To protect the lives and property of the people with sincerity and to keep active for the eradication of criminals is the major aim of Punjab Police.

He further said that it was as important to encourage those who performed well as to punish those who showed dishonesty and negligence in their duties and this purposeful process of punishment and reward in the police department would be continued at all levels.

He said that Lahore-Sialkot Motorway Violence Case was a difficult and challenging case in which Punjab Police was blessed with the grace of Allah and its professionalism and thanks to the tireless work, professionalism and excellent teamwork of Investigation, CTD and other fields due to which accused were arrested in a short time. He further said that the police teams ensured the arrest of both the accused through efficient use of modern technology and professionalism, the hard work, dedication and professionalism of all police departments in solving difficult and sensitive cases is really appreciable. He further said that today’s ceremony was a continuation of the illustrious policy of the Punjab Police, according to which the officers and personnel who put the protection of life and property and service of the citizens above their own are given full encouragement. He commended the officers and personnel who successfully traced and arrested the accused in the Lahore-Sialkot Motorway Violence Case and directed that the dutiful and capable police officers who have rendered valuable services for the protection of life and property of the people. The officers and officials of the force are a proud asset and we will continue to take all possible steps to encourage it. He expressed these views while addressing a ceremony held at the Central Police Office here today.

During the ceremony, IG Punjab distributed cash prizes and appreciation of Rs 2.5 million among 40 officers and personnel posted in CIA, CTD, CRO and other branches. Among the recipients of the prizes were Inspector Syed Hussain Haider, Inspector Javed Hussain, Inspector Ali Ahmed and Inspector Tariq Khan the amount of rupees one lac each.

Addressing the officers and personnel, the IG Punjab further said that the police officers and personnel would continue to take all possible steps for the protection of life and property of the people in the spirit of service and the police department would continue to hold ceremonies in their honor. He further said that today’s ceremony was also an acknowledgment of the fact that while mistakes are being reprimanded in the police department, duty and excellent performance is also appreciated. He further said that the responsibility on the recipients of the award has increased. And they have to work harder than ever.