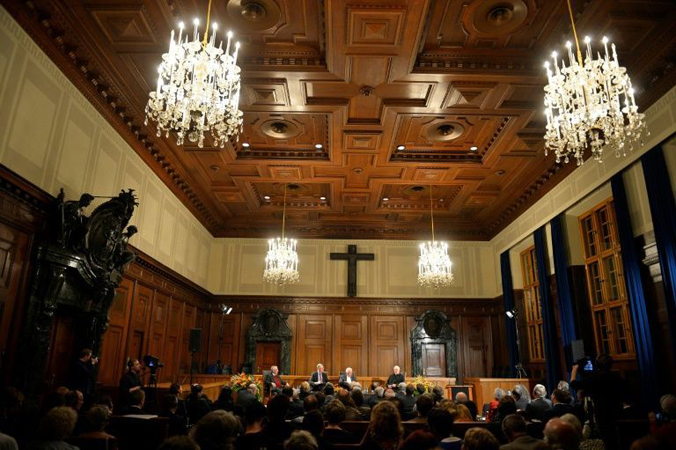 He looked Hermann Goering and Rudolf Hess in the eyes and saw them plead “not guilty”, without so much as blinking. And three-quarters of a century on, Frenchman Yves Beigbeder, 96, one of the last surviving witnesses to the 1945-1946 Nuremberg trials of the Nazi leadership after World War II, believes the world needs international justice more than ever. Adolf Hitler’s number two Goering and ex-deputy leader Hess were among a host of top Nazis convicted by the court, with the former committing suicide before he was due to be hanged and the latter dying in jail in 1987.

Beigbeder was a nephew of French judge Henri Donnedieu de Vabres and his uncle had asked him to work as an assistant to the court in the ravaged German city that was once a symbol of the Third Reich’s power.

Arriving in Nuremberg, Beigbeder, then 20, was struck by the omnipresence of Americans who were in control the city and had brought in their own culture, including hamburgers and fizzy drinks.

He worked for six months as an assistant, putting together summaries for the judge. “I received every day the verbatim of the debates, I made summaries of 2-3 pages, dictated them to secretaries.” And sometimes attended the hearings themselves.

“It was impressive, especially the contrast with the glorifying of the Nazi party and Hitler’s big rallies. Here they were in long jackets, without medals and depressed-looking,” he told AFP in an interview at his home in the foothills of the Pyrenees in southwest France.

There were moments when the sheer horror of what happened was made all too clear. Beigbeder remembers the testimony of Rudolf Hoess, former commander of the Auschwitz extermination camp, just after footage of corpses had been shown.