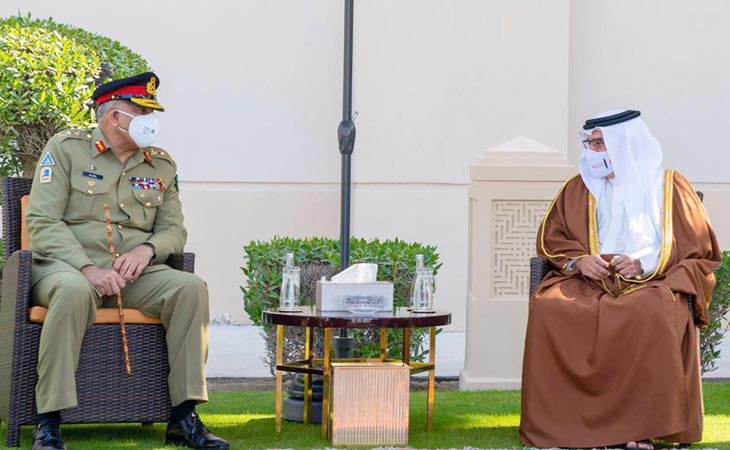 Pakistan and Bahrain pledged to keep working for better relations between the two brotherly countries, according to a statement issued by Inter-Services Public Relation (ISPR) on Friday.

According to ISPR, General Bajwa also appreciated the standard of training and the results attained and said that “the exercise signifies the joint efforts of both nations against terrorism”.

Also, a US delegation led by Assistant Secretary of Defence for Indo- Pacific Security Affairs David Helvey, visited General Headquarters (GHQ) on January 7 to hold formal consultations on Pakistan-US Strategic Level Defence Dialogue. The Pakistani delegation was led by Chief of General Staff Lieutenant General Sahir Shamshad Mirza, said a statement released on Friday by the ISPR. In a daylong session, issues ranging from regional security to deepening of bilateral defence and security and military to military cooperation were discussed. The discussions were held in a very cordial and constructive manner where both the sides exchanged views and ideas on various matters.

Meanwhile, Nawaf bin Saeed Al-Maliky, Ambassador of the Kingdom of Saudi Arabia, called on Secretary of Defence Lt Gen (r) Mian Muhammad Hilal Hussain in his office at the Ministry of Defence. The secretary welcomed the dignitary and conveyed that Pakistan attaches great value to its relations with Saudi Arabia. The scope and scale of defence cooperation between two countries is exemplary and all efforts are in hand to further enhance the level of cooperation. The Ambassador H.E.Mr.Nawaf bin Saeed Al-Maliky, reciprocated these sentiments. He expressed his desire to further diversify the defence cooperation and enhance transfer of technology in defence production domain. He expressed his appreciation for the military training offered by Pakistan armed forces training establishments and the standard being maintained therein.