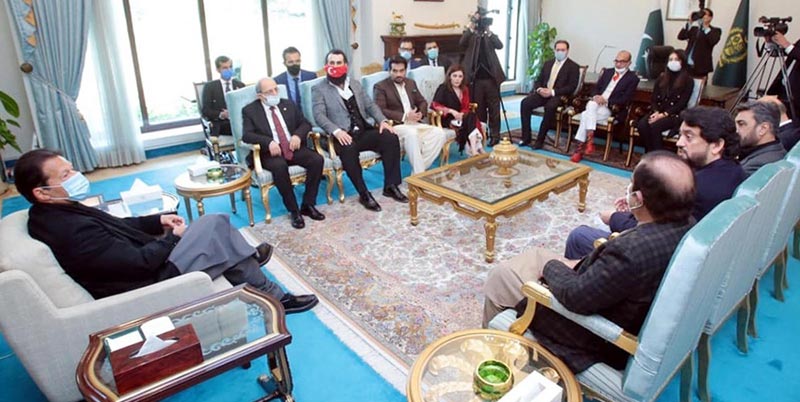 Prime Minister Imran Khan Thursday congratulated the exporters and Commerce Ministry over positive growth of the country’s exports during the last two months, contrary to the negative trend in India and Bangladesh.

According to official data, Pakistan’ exports grew by 8.32 percent in November last year against -9.07% of India and 0.76% of Bangladesh.

The prime minister said as per the regional export trends, the exports of India and Bangladesh for November and December 2020 showed negative growth, unlike Pakistan.

“I wish once again to congratulate the exporters and the Ministry of Commerce for this achievement,” the prime minister said on Twitter.

Dr Moeed Yusuf briefed the meeting that an extensive mapping exercise about export potential of goods and services has been carried out in consultation with relevant government ministries, provinces and the private sector. He informed that Information Technology, Textiles, Agriculture, Meat, Leather, Pottery & ceramics, machinery and auto parts, metals and surgical instruments possess an additional export potential of US$31 billion.

The SAPM further updated that a multiplier effect of additional US$ 2 billion can be achieved from medical tourism, religious tourism, transport services, manpower, pharmaceuticals, marble & granite and salt products. He apprised that there is potential of additional exports worth US $ 16.7 billion to UAE, USA, China, Germany, UK, France, Indonesia, Spain, Algeria and Malaysia.

Also, Prime Minister Imran Khan on Thursday directed the Khyber Pakhtunkhwa (KP) government to ensure the sufficient availability of daily use commodities for the masses.

The prime minister, in a meeting with KP Chief Minister Mahmood Khan, appreciated the provincial government for taking measures to bring about food security, a PM Office press release said.

Besides discussing the political situation, the chief minister also apprised the prime minister on the food security policy of his government.

The PM also urged the country’s film and drama industry to come up with a quality local production to provide the youth with a welcoming Ertugrul-like alternative of substandard and glamorized content.

“If Pakistani film and drama industry presents quality local production, it will not only progress but also provide the youth with alternative of substandard and glamorized content, which will be welcomed like that in the case of Ertugrul,” he said. The prime minister expressed these views during a meeting here with the founding team of popular Turkish drama serial Ertugrul, led by Kemal Tekden.

Minister for Information and Broadcasting Senator Shibli Faraz, Kashmir Committee Chairman Shehryar Khan Afridi, and the representatives of Turkish and Pakistan film industry were present in the meeting.

The meeting discussed in detail the proposed television series based on the role of renowned Sub-continent personality Turk Lala in the Khilafat Movement, to be produced through cooperation between Turkey and Pakistan.