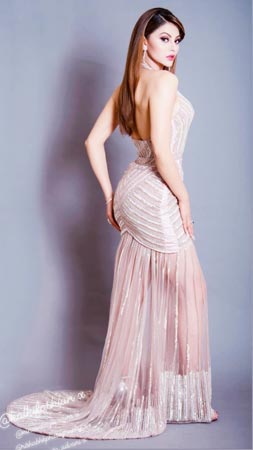 Stunning Bollywood star and supermodel, Urvashi Rautela, has always been a symbol of style in the industry throughout her journey in the limelight.

Her fashion choices have always left us in awe and created new trends in the industry and we adore the style quotient that Urvashi Rautela brings to the industry. Not only is the actress experimental with various out-of-the-box looks, but she also stays traditional with her classic Indians, bringing grace to all her fabrics.

Urvashi’s red outfit which has been talk of the town has been designed by Filipino designer Michael Cinco. The designer revealed the process of making the dress, and said “It is an absolute delight to have Bollywood’s young superstar Urvashi Rautela wearing the red sequinned dress and rocking the New Year event, the backless gown is giving all red fairy look to the diva and creating dazzling trend around. On detailing part of the dress, it is made of beaded tulle with exquisite details in Indian inspired intricate pattern. It took us 150 hours to finish this dress on the price value for $45,000 USD. This is the perfect outfit for the kind of personality she is as she carries the look with so much grace.”

Michael Cinco also designed the dress for Aiswarya Rai Bachchan which she wore for Cannes.

Talking about the workspace, Urvashi was recently seen in a music video titled ‘Woh Chaand Kaha Se Laogi’ opposite television actor Mohsin Khan. Apart from that, she also has another music video titled ‘Teri Load Ve’. In an interview, she admitted that she enjoyed doing music videos. She was last seen in ‘Virgin Bhanupriya’. She will also be seen in ‘Black Rose’, which is said to be a bilingual thriller, and will be released in Hindi and Telugu. The team reportedly shot the project once the lockdown curbs were lifted. Recently the first look of Urvashi Rautela’s Tamil remake film ‘Thiruttu Payale 2’ created a huge buzz. The actress will be also seen in an international project opposite Egyptian superstar Mohamed Ramadan, the announcement for the project will be made soon.