In last-gasp showdown, Trump allies in Congress to challenge his loss to Biden 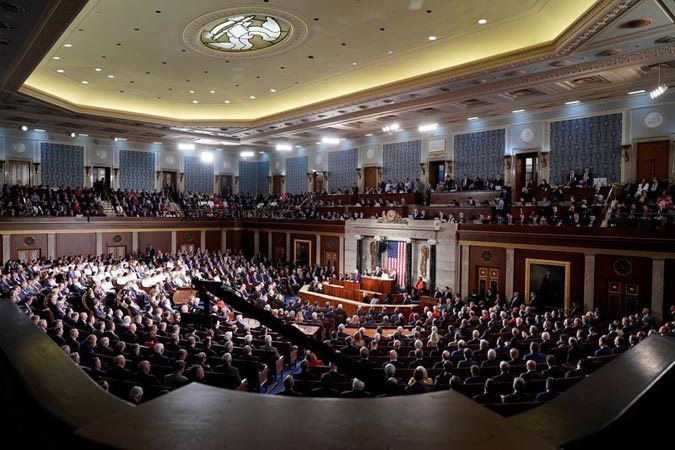 A band of President Donald Trump’s Republican allies planned a last-ditch effort on Wednesday to undo his election loss to Democrat Joe Biden, a bid almost certain to fail that comes on the same day their party is poised to lose its majority in the Senate.

The Republican-led Senate and Democratic-controlled House of Representatives were due to meet to formally certify Biden’s victory in the Nov. 3 election in proceedings that could stretch past midnight. In a joint session of Congress, Trump’s allies plan to challenge the results from a handful of states won by Biden.

Thousands of pro-Trump protesters converged on Washington ahead of the session at his urging. Some clashed with police overnight.

Biden won the election by a 306-232 count in the state-by-state Electoral College and by a margin of more than 7 million ballots in the national popular vote, but the Republican president continues to falsely claim there was widespread fraud and that he was the victor.

State and federal reviews have debunked Trump’s claims of massive election fraud even as increasingly desperate legal efforts by his campaign and allies on the right to overturn the election have failed in numerous courts all the way up to the US Supreme Court.

Despite pressure from Trump to help overturn his election loss, Vice President Mike Pence, set to preside over the proceedings, will stick to his ceremonial duties and not block the congressional certification of Biden’s victory, advisers said. Pence, a loyal lieutenant during the four years of Trump’s tumultuous presidency, has no plans to intervene and has told Trump he lacks the power to do so, they said.

Trump took to Twitter to again make unfounded claims of election irregularities, writing, “Our Election Process is worse than that of third world countries!”

Senator Ted Cruz, seen as a potential 2024 presidential candidate, is expected on Wednesday afternoon to lead at least 11 other Republican senators, alongside a majority of the 211 Republicans in the House of Representatives, in objecting to Electoral College results being formally approved by the two chambers of Congress.

The proceedings scheduled to begin at 1 p.m. EST (1800 GMT) for Congress to formally certify the presidential election results, the final step in a monthslong process, normally would be ceremonial and perfunctory. This year, the proceedings could drag into Thursday.

Critics of Trump and his allies have painted the efforts to try to reverse the election in Congress as an attack on democracy and the rule of law and an attempted legislative coup.

Cruz is bucking Senate Majority Leader Mitch McConnell, who has recognized Biden’s victory and urged his fellow Republicans not to pursue the challenges, which appear to lack the political support they would need to succeed.

Republican senators, including Josh Hawley and James Lankford, have joined forces with Cruz, while other prominent members of the party, including Senator Mitt Romney and Representative Liz Cheney, oppose it.

Thousands of Trump supporters, including some members of violent far-right groups, staged demonstrations as they took up the president’s unfounded claim that the election was stolen from him in an elaborate conspiracy. Many donned Trump’s trademark red “Make America Great Again” hats and flags bearing his name, and a few carried a large Christian cross.

Trump is due to address them on a grassy expanse known as the Ellipse near the White House. One of his sons, Donald Trump Jr., and his personal lawyer, Rudy Giuliani, spoke to the demonstrators.

Police this week arrested the leader of the Proud Boys, a group that has supported Trump, on charges of destruction of property related to an earlier protest and possession of a firearms magazine.

Many Republican senators who have refused to challenge the election results have received death threats on their office voice mail, a senior Senate Republican aide said.

The Electoral College results will be presented alphabetically, starting with Alabama. Republicans are expected to challenge results in Arizona, Michigan, Wisconsin, Georgia, Pennsylvania and Nevada.

If the challenges are ultimately defeated as anticipated, Pence, acting in his role as president of the Senate, is expected to proclaim Biden the next president and Senator Kamala Harris as the next vice president.

The US Constitution does not give Pence the power to unilaterally overturn the results of the election but he is under pressure to do so from Trump.