The shock it gave us all! 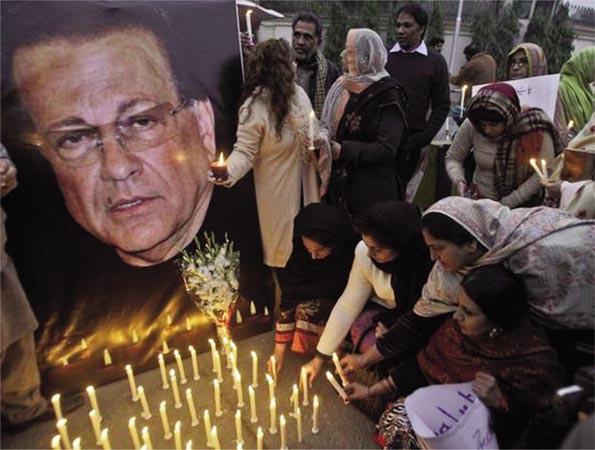 As if driven by intuition, only a few days before MumtazQadri gunned him down at Kohsar Market in the heart of the federal capital of Islamabad, Salman Taseer had tweeted:

“I was under huge pressure sure 2 cow down b4 rightist pressure on blasphemy. Refused. Even if I’m the last man standing.”

January 4 (2011)  therefore marked one of those darkest days when a self-righteous and delusional defender of faith took the law in his own hands to silence a person he thought was endangering his beliefs.

As a vocal critic of the blasphemy laws in Pakistan, particularly in the Aasiabibi case, Taseer routinely spoke out against the draconian practice of weaponing the Blasphemy law to subjugate and persecute minorities (and to a much lesser degree, detractors and dissidents).

His outspoken position put him constantly at odds with religious elements in the country, with some clerics declaring him “wajib-ul-qatl”, or “rightfully to be killed.” There was limited to no hue and cry over these sermons, and Taseer’s unequivocally defiant responses only seemed to burn the hatred brighter.

Often viewed as a Musharraf aide and compatriot, Taseer was always at odds with the ruling party in Punjab, who termed his appointment as a blatant attempt to undermine the PMLN provincial government in the Punjab province. His war of words with key stalwarts of the PMLN, particularly Rana Sanaullah, is well-documented and established. These regular spates also extended to Shahbaz Sharif, who Taseer ridiculed for cozying up to members of a banned outfit the year prior to his assassination during the by-elections in Jhang. This acute difference made him one of the most hated personalities in the upper echelons of the PMLN.

Taseer’s killing was a direct result of his passionate tirades against the blasphemy laws and Pakistan’s treatment of minorities. It is worth mentioning here is that Taseer towed this line irrespective of the public stance of the PPP at any given point in time. His most daring act, in pursuit of showcasing the blasphemy problem in Pakistan, was his public commitment to seek a Presidential pardon for Aasia Bibi.

In the days leading up to his death, he was in hot waters with the far right. There were protests in front of the Governor’s House in Lahore, death threats against Taseer and associates, fatwas by clerics calling for his head, and concerted campaigns to pressure him into silence. Regardless of how one feels about the personal and political life of Taseer, it takes nerves of steel, and the courage of champions, to remain steadfast in the face of such opposition, and defiantly hold on to the views that he believed in.

The scale of the blasphemy law issue in Pakistan is exemplified by the Taseer killing. The sitting Governor of the most populous province in the country, appointed by the party leading in the center, traveling in the relative safety of the Islamabad bubble, at one of the busiest markets in Islamabad, less than two kilometers from the Supreme Court of Pakistan, and the Parliament House, was gunned down by his own security guard, in broad daylight, with dozens of witnessed, and the killer was widely hailed as a hero by the far right elements.

If Salman Taseer couldn’t escape the rage and hatred brought about by his criticism of the law and its misuse, then who was?  At the moment the socio-political environment indeed was explosive and intimidating in view of the terrorist incidents across the country, particularly in the KP and Balochistan, where nearly 50 suicide bombings and dozens of other terrorist attacks had claimed nearly 3000 lives in in over 2000   violent incidents.

Taseer’s assassination indeed sent shivers down the spine of many, even within the security establishment. When I met with the then chairman joint chiefs of staff, General ShamimWyne at his Rawalpindi a few days later, he too looked worried. As we  discussed the spate of suicide bombings that were sweeping the KP province in those days, Wyne took a deep breath and spoke of what way the Taseershahadat had impacted the armed forces.

“ We have doubled up our surveillance within all garrisons, left with no choice but to watch out for elements who think the system is at odds with their beliefs,” Wyne, who himself died in a tragic road accident in 2018, told me.

The impact on political leadership and the civil society too was pronounced; subdued criticism of the incident in the media was anchored more in religious beliefs than in the rule of law regime. We personally faced acrimonious and hostile attitude in public and TV discussions at the hands of those who never thought for a moment that Islam doesn’t permit individuals to take law in their owns hands.

The only lesson one MUST draw from Salman Taseer’sshahadat is that there are laws one could invoke if personal, religious or political beliefs were under threat.    And the only thing the state institutions could do is to indiscriminately enforce those laws once breached.

The past few years have amply demonstrated that if sincere and determined, state institutions can take the bull by the horn. Wish they had the same determination a decade ago.