Khawaja Asif has been arrested by NAB in Assets beyond means 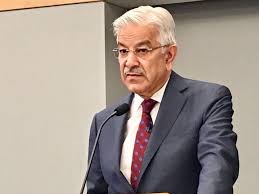 He was arrested after coming out of the residence of PML-N Secretary General Ahsan Iqbal where he attended a consultative meeting to decide whether or not the PML-N should contest the Senate election.

Teams of NAB Lahore and Rawalpindi arrested Khawaja Asif and shifted him to NAB Rawalpindi. After medical examination, Asif would be produced before an accountability court in Islamabad on Wednesday (today) for his transit remand.

According to sources, Chairman NAB Justice (retd) Javed Iqbal signed the arrest warrant for Asif on Tuesday. Sources said NAB Lahore was not satisfied with the reply of Khawaja Asif in the alleged assets case and a team was dispatched to Islamabad for his arrest.

Sources in the NAB said Khawaja Asif failed to reply to the questions about his assets. Asif was disqualified by the Islamabad High Court (IHC) just before the 2018 general elections for possessing an Iqama but the Supreme Court declared the verdict null and void allowing him to contest the election.

Asif held an Iqama from 2004 to 2008 and earned a total of Rs136 million for his services as consultant. Sources said the NAB had asked Khawaja Asif to submit details of appointment as consultant, application for the post and details of salaries. However, Asif did not submit the required details.

The NAB claimed that all the legal requirements had been met to arrest Asif. Reacting to the development, PML-N Quaid Nawaz Sharif condemned the arrest. In a message, he said the arrest of Khawaja Asif was a highly reprehensible incident exposing the nexus between ‘the selectors’ and ‘the selected’.

The government’s bewilderment can be gauged fromsuch heinous acts, but they are bringing their fate closer. “The days of blind political revenge are numbered,” he maintained.

PML-N Vice President Maryam Nawaz urged Chief Justice of Pakistan (CJP) Mr. Justice Gulzar Ahmed to take notice. Talking to reporters here, she said the Supreme Court should not remain silent on the NAB ‘terrorism’ whom the government had been using for political engineering.

“You have already given observations on the NAB’s role and it’s time to move forward to stop this brutality,” said Maryam while addressing the chief justice. Maryam said Asif was arrested at a time when the opposition was preparing to resign from the assemblies and he could play an active role in this regard.

“But we cannot be bullied by such tactics,” Maryam said, adding that she’d already received resignations of parliamentarians including 159 members of the Punjab Assembly. She said the PDM and PML-N would react strongly to the arrest and asked the government to release Asif.

“You will have to release Khawaja Asif otherwise get ready to face the consequences,” Maryam said. The PML-N leader said she would hold meetings on Wednesday (today) while the PDM leaders would meet on Thursday.

“What kind of democracy is this in which the opposition leader has been in jail for months and now our parliamentary leader has been arrested,” she remarked. To a question, Maryam said Nawaz would not get back before completion of his treatment to himself surrender to his enemies.

“No commitment was made that Nawaz Sharif will return in a stipulated time,” she said. She said the NAB could not bully the opposition but it was in haste to send the government home. She declined to name the person who’d asked Khawaja Asif to leave Nawaz Sharif.

According to NAB, Asif allegedly committed offences of corruption and corrupt practices as defined u/s (v) of NAO-1999 and Section -3 of Anti Money Laundering Act (AMLA) 2010, as he accumulated assets disproportionate to his known sources of income and laundered such assets by concealing the origin and nature of assets.

It said accused Khawaja Muhammad Asif became public office holder in the year 1991 as Member Senate of Pakistan, and subsequently remained MNA and Federal Minister on various occasions. Before holding public office in 1991, his net worth was Rs5.1 million, while after holding the public office he acquired assets worth Rs221 million approximately (traced so far) till 2018 which are disproportionate to his known sources of income.

The Bureau said accused Khawaja Muhammad Asif claimed to have received Rs130 million approximately as salary from an employment in the UAE with a company named M/S IMECO; however, he failed to provide any documentary evidence for receipt of the said salary which showed that a fake source of income was created by him to justify his alleged ill-gotten assets.

“Accused Kh Asif has been operating a benami firm Tariq Mir and Co in the name of his low wage employee Tariq Mir. More than Rs400 million was deposited in cash in the bank account of Tariq Mir and Company without having any plausible source of funds.

His case of foreign employment as federal minister was subject matter in proceedings before honourable superior courts, whereby it was held that there was no conflict of interest in holding private/foreign job. However, NAB‘s inquiry is to ascertain whether his foreign job /source of income is genuine or otherwise.

An inquiry has revealed that during his so-called foreign employment, he was present in Pakistan, and the documents of employment were managed by him only to create a fake source of income in order to launder and whiten his unexplained funds.

Khawaja Muhammad Asif could not provide documentary evidence of receipt of salary from foreign employer.” Federal Minister for Information and Broadcasting Shibli Faraz said the arrest of PML-N leader and parliamentary leader in the National Assembly Khawaja Asif was a purely legal matter and the government had nothing to do with it.

Adviser to the Prime Minister on Accountability and Interior Barrister Mirza Shahzad Akbar Tuesday said sources of income had to be proved but Khawaja Asif could not satisfy the NAB about his income. He said Asif remained a public office holder but took salary from a foreign company.

Talking to a local TV channel, he said if the income was legitimate, then there must be a proof. Reacting to Maryam Nawaz’ statement, he said she herself was convicted and her statement that Khawaja Asif had been abducted was ridiculous.