UN confirms its vehicle on patrol hit near LoC 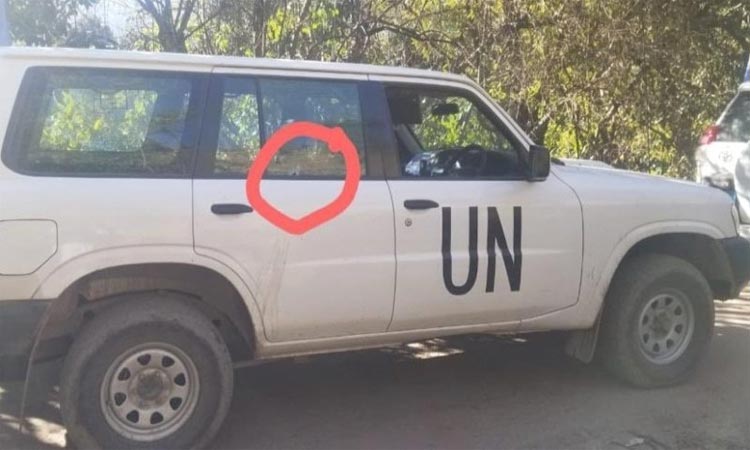 The United Nations has confirmed that a vehicle of the UN Military Observer Group in India and Pakistan (UNMOGIP) was hit by an ‘unidentified object’ near Rawalakot on the Pakistani side of the Line of Control (LoC) in the Indian Illegally Occupied Jammu and Kashmir (IIOJK) region, but the occupants were not injured.

“The Mission is currently investigating the incident,” Deputy Spokesman Farhan Haq said in response to a question at the regular briefing in New York. He said the incident occurred when UNMOGIP military observers were conducting routine monitoring activities near Rawalakot as part of the Mission’s mandate to observe and report on ceasefire violations at LOC in Jamm and Kashmir. “UNMOGIP personnel and the driver were not harmed but the vehicle sustained some damage,” the spokesman said.

In Islamabad, the Foreign office said that Indian troops ‘specifically targeted’ the UN vehicle carrying two UNMOGIP officers from across the Line of Control, in what was termed a ‘new low’ in their conduct. The UNMOGIP officers were on their way to Polas village to meet with the victims of Indian ceasefire violations when they came under fire, the foreign office said. The officers were immediately evacuated by the Pakistan Army and brought back to the UNMOGIP field station in Rawalakot.

The incident happened as Foreign Minister Shah Mahmood Qureshi told a press conference in Abu Dhabi that he had credible information that India was planning a ‘surgical strike’ against Pakistan to divert attention from its internal affairs.

Pakistan on Saturday summoned the Indian Chargé d’Affaires to Foreign Office for registering strong protest at the deliberate targeting of Observers belonging to the United Nations Military Observer Group in India and Pakistan (UNMOGIP).

The UN Observers were on their way to Polas village in Azad Jammu and Kashmir to meet the victims of the Indian ceasefire violations in Chirikot Sector of the Line of Control (LOC). “Both the Observers present in the vehicle thankfully remained unharmed and were safely rescued and evacuated to Rawalakot by the Pakistan Army. However, their vehicle sustained damage,” Foreign Office spokesperson said in a statement.

He said the attack was unambiguously premeditated as the UN vehicles were clearly recognizable even from long distances due to their distinctive marking and blue flag. He said the deliberate targeting of a UN vehicle, engaged in discharging the mandate of the UN Security Council, constituted a grave violation of India’s obligations, under the Council’s resolutions and the UN Charter, which included the obligation to ensure the safety and security of the UNMOGIP Observers. “It appears to be a new coercive and reckless Indian ploy to hinder the observers’ work,” the spokesperson remarked.

He said it was communicated to the Indian side that the brazen act was a flagrant violation of established international norms and represented a complete disregard for principles enshrined in the United Nations Charter. It was also conveyed that the reprehensible act also represented a new low in the conduct of Indian occupation forces which target not only innocent civilians residing along the Line of Control but United Nations Observers as well.

The Indian side was called upon to desist from such blatant violations of international law; respect the 2003 ceasefire understanding between India and Pakistan; and let the UNMOGIP perform its role mandated by the UN Security Council.

The officers were immediately evacuated by the Pakistan Army and brought back to the UNMOGIP field station in Rawalakot, the Inter-Services Public Relations (ISPR) had said a day earlier. Sharing pictures of the UN vehicle with bullet holes, the military’s media wing said the attack was “deliberate” since “UN vehicles are clearly recognisable even from long distances due to their distinct make and type and clearly visible markings.” “Such illegal and unlawful acts against all established international norms, signify mal-intent of Indian Army to target not only innocent civilians residing along the Line of Control but UN Peace Keepers as well,” it had said. “This act only goes to show Indian Army’s complete disregard to principles enshrined in [the] UN Charter. It is indeed a new low for Indian Army.” The ISPR had said the Pakistan Army stood in solidarity with UNMOGIP officials and appreciated the “selfless services rendered by all members of UNMOGIP in discharge of their UN-mandated duties”.