* Now Samantha is reflecting on her life, both before and after her time with her late husband, in a new book, Falling Love Notes: Memories of a Rock Star Wife 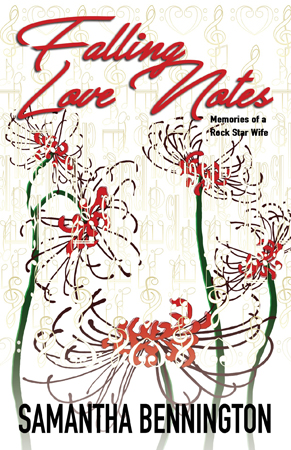 Chester Bennington met his first wife, Samantha, when he was 19 and she was 22. A few years later, he auditioned for Linkin Park and their lives quickly changed. The couple had a son, Draven, in 2002, but ultimately, they weren’t able to work as a couple and divorced in 2005, remaining close as they raised their son.

Now Samantha is reflecting on her life, both before and after her time with her late husband, in a new book, Falling Love Notes: Memories of a Rock Star Wife. Now a life coach, she had started writing the book almost a decade ago with the intention of releasing it in late 2017, but after Chester died by suicide that summer, an event spurred on by his ongoing battles with addiction, she put the project on hold. When she returned to it, she rewrote nearly half of it. “With the world in such a chaotic place with a global pandemic and political elections,” she tells Rolling Stone, “I feel people need to connect and find hope more now than ever.”

Much of the book is an honest account of both the good and difficult times she spent with Chester, even after they ended their marriage, highlighted by her explanations of how she carried on. In this exclusive excerpt, Samantha recalls how she and Draven reacted when they learned that Chester had abruptly gone back into rehab at a time when he was supposed to spend time with his son.

Despite the situation she describes here, she says Chester appeared to be in good shape around the time of his death. “He was in the healthiest place I have ever seen him physically and mentally,” she says. “I mean honestly, can you do the human flagpole? I do not think a human being can turn their body completely vertical into a flagpole while also using drugs and alcohol.”

With that in mind, she hopes Chester’s fans remember him for more than his weaknesses as they read the book. “I would like to remind them that he is not the ‘Face of Depression,’ and to our son and his other children, family, and friends, that his legacy should be how his lyrics, angelic voice, and music have reached and touched so many people’s lives around the globe in a positive way.”

When Chester and I first divorced I was fearful of getting that “phone call.” You know, the one you get when a celebrity overdoses. I’m super spiritual so I always prayed, meditated, and cleared the negative energy for Chester, Draven, and me. Then came that moment when I wasn’t afraid for Chester anymore. He was healthier than ever. His fitness was on point, and our conversation and clarity proved he was completely in the clear in every way.

Every Valentine’s week, Draven and I always took a trip somewhere. He was out of school for ski week, so we either did a tropical trip or a snow boarding trip. Chester knew that our son would always be my first Valentine, and that this was the one week a year we didn’t share him. I admit I pulled the “I gave birth to him card” on this one. LMAO.

In 2015, the year Draven turned 13, we were in Park City, Utah with close friends. When I had recently met with him, I thought Chester was clean and sober, and the healthiest I had ever seen him. He was more independent and was spending more time with Draven on his own than he had in the past. Draven was very happy about doing things with his dad outside of his home, especially participating in parkour, rock climbing and when his dad joined our family and friends for birthday parties without his spouse or other kids. It made Draven feel like he didn’t have to share, and he got his father’s undivided attention.

Draven was snowboarding with friends when we all met up in the middle of the mountain. There, I received this bizarre text: I WON’T BE ABLE TO SEE DRAVEN FOR A COUPLE OF MONTHS, FYI. I looked at my phone in disbelief. Something was off.

I showed him my phone and he shrugged. “Sounds like rehab,” he said.

“No, Dra. Something’s off, and yes it sounds like rehab, but I don’t believe he needs that,” I said.

No parent sends a text like that to another parent. I know Chester did, because I received it. That said, I think it was his way of telling me something was wrong, because that kind of text without explanation would set any parent off. I mean honestly, FYI, are you kidding me? So really, I was more worried than mad. Eventually, and I mean weeks after, I sent him a reply text. I had waited to send it because I wanted to trust Chester’s words and give him some space. But, my eventual text read: LUCY, YOU HAVE SOME EXPLAINING TO DO! I was going for a Ricky Ricardo and Lucy kind of tone. I kept it light, but let him know that through my not knowing what was going on, I was running out of patience!

Chester replied with a screen shot of the number of days he’d been sober. He was in a rehab, again, but I still did not believe he needed to be there, because he had become so addicted to working out. He was in possibly the best physical shape of his life. I was sure that he was clean. You simply cannot be in that great of shape and be using substances. When he finally called, he asked if we could come visit and do a family weekend. “Yes,” I said, “just tell us when.” Unfortunately, the family weekend never happened.

Then Chester called. “As soon as I get home, can I please take you and Draven out to dinner and explain everything?” he said.

“Of course,” I replied. We decided on an early dinner and met at 5 p.m. at the California Pizza Kitchen in Torrance. When he started to share with us, I became increasingly concerned and empathized with his energy. I then asked the waiter for a glass of wine. I’m a “normie,” someone who can drink and is not an alcoholic, slang for normal. In the past, I sometimes drank in front of Chester. He had been sober for years and had such a grip on his sobriety that it did not bother him. But, hearing what we were hearing from him, I needed to calm down.

I was upset with how much he shared with Draven and me. I even said that Draven was too young, and wondered if he should be included in the discussion. Chester was very angry that others put him in rehab without his true consent, and shared all his feelings with us both. These were very deep, personal feelings, concerns and fears. It was so much to take in that my nerves became tight. I was very concerned for him and wondered how he was going to make some major, and needed, changes in his life. Change is always needed when we are unhappy and Chester told us he was very unhappy––and angry.

As he continued to share, Draven and I glanced at each other to make sure we both had heard the same thing. Chester picked up on our concern, and I was convinced that everything was going to eventually be okay. I told him I would help any way I could. We had built a lifestyle together and I would always help him. If he needed a home, I would have said, “pick one.” If he needed money, it was his. If he owed me money, we would work out a payment plan. It was never the end. We both came from nothing and were self-made, so money didn’t mean everything to us. Although, we did spend more money then most fighting our divorce. But since then we had come full circle and were back to being friends.

By the end of our dinner and conversation, with Draven and me doing most of the listening, I left feeling disturbed, but also feeling good that Chester had been so open and honest. Chester was so vulnerable and my concern shifted more to whether Draven could handle everything his dad had said.

Draven and I communicate well, so during the next few days I paid more attention to him, checked in with him, and asked more questions of him, all making sure he was emotionally sound. With our recent move to Malibu, with high school starting, and with so many other changes, such as a recent move, new school, making new friends, and navigating ninth grade, I knew it was time to check in with the co-parent therapist who Draven saw privately, and who Chester and I saw together. It was after one such session that Draven made the decision not to stay at his dad’s anymore. He wanted to see his dad on his own terms. When a child turns 14 in the state of California, he or she can then legally decide custodial parenting and visitation schedules, or at least a judge will take a child’s choice into serious consideration.

I thought, holy shit, here we go into a huge battle! I was prepared for the worst, but after Chester expressed how unhappy he was with Draven’s choice, he said calmly he didn’t like the idea, but he understood. He wouldn’t fight Draven on this. That was between the two of them. Draven was old enough where I didn’t have to fight all his battles. It was important to me that father and son work on their relationship without me always involved. The time had come and my baby was growing up.

From Falling Love Notes: Memories of a Rock Star Wife by Samantha Bennington.