* Furthermore, the second leading character of this story is Armanoush 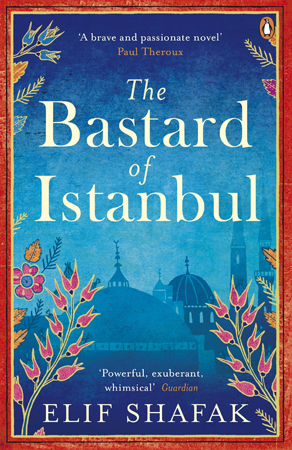 The Bastard of Istanbul is one of the fiction works by the renowned author of the 40 Rules of Love, Elif Shafak, who writes in both English and Turkish.

She was born in Strasbourg, France on 25th of the October 1971. However, after the separation of her parent’s, she was brought up by her mother and grandmother in Ankara, Turkey. The Bastard of Istanbul was first published in 2006 by the Viking penguin. The story of this novel is based on two main characters, however, many more characters emerge as we go on reading and each of them play a very important role. The first leading character in this novel is Asya Kazanci, a bastard, who hates to know about his past, for she thinks that past merely leaves grudges on one’s heart nothing more. Asya lives with the bevy of women her four aunts, grandmother and great grandmother, she has never seen a man in that home. The men in Kazanci family couldn’t live after their forties it was believed that there was a kind of curse in Kazanci family which didn’t let the men of Kazanci live after their forties. However, Mustafa the youngest and the only remaining man of Kazanci family, was sent to America to so that he may escape from that curse. Along with this, nobody knows that who is the father of Asya except her mother and her eldest auntie, Banu, who is clairvoyant. In addition, Asya calls her mother auntie without knowing why? Moreover, she gradually gets sick of her family of women and calls it a nuthouse and she usually escapes to a coffeehouse where she has some friends.

Furthermore, the second leading character of this story is Armanoush. While Armanoush’s childhood, her parent’s separation occurs. Her father is an Armenian and after the separation her mother marries a Turkish man, Mustafa. However, there the Turkish and the Armenian had an unsweetened and unforgettable past and to know the real truth Armanoush travels to Istanbul the birth place of her grandmother. She wants to know what had happened during the war of 1915 which resulted in genocide of Armenians. However, it would be worth mentioning that each chapter title is a different foodstuff: dried apricots, dried figs, white rice, rose water and etc. Being a bookworm, I don’t think that this is a story based but a character based, because when we go one reading we will find many more characters which eventually are interconnected to one another. And each has a different story to tell. Moreover, I don’t think that this books lacks anything, the story is quite engrossing and the climax is outright unpredictable as well as the language is also appropriate and befitting. Along with this, Elif Shafak has also put her best to lay some shed to history. The book is worth reading and as for as rating is concerned, I give this book five out of five stars.

The writer is a student based in Shikarpur