Indonesian cleric turns himself in for COVID-19 violation 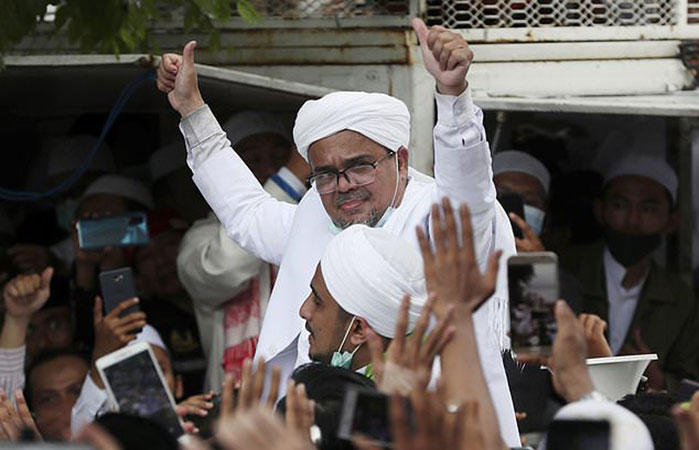 A firebrand Indonesian cleric turned himself in to authorities Saturday after he was accused of inciting people to breach pandemic restrictions by holding events with large crowds.

Rizieq Shihab, leader of the Islamic Defenders Front, arrived at Jakarta police headquarters a day after police warned they would arrest him after he ignored several summonses. Wearing a white robe, turban and face mask, Shihab told reporters that he never ran away or hid from police. “With God’s permission, I can come to the Jakarta police for an investigation according to the laws and regulations,” he said ahead of questioning.

Jakarta police spokesman Yusri Yunus told a news conference Friday that Shihab is accused of ignoring measures to curb the spread of COVID-19 by holding an event to commemorate Prophet Muhammad´s birthday and the wedding of his daughter last month that pulled in thousands of his supporters.

He said Shihab could face up to six years in prison if found guilty of inciting people to violate health regulations amid an outbreak and of obstructing law enforcement. Shihab´s presence in several events in Jakarta and West Java attracted large crowds with attendants visibly ignoring physical distancing and many failing to wear masks.

Jakarta Gov. Anies Baswedan and West Java Gov. Ridwan Kamil have been questioned as witnesses in the case. The gatherings took place less than a week after his arrival from a three-year exile in Saudi Arabia.

Shihab left Indonesia in 2017 for a pilgrimage to Mecca shortly after police charged him in a pornography case and with insulting the official state ideology. Police dropped both charges a year later due to weak evidence, but authorities in Saudi Arabia had banned him from leaving the country without an explanation.

The Islamic Defenders Front, known by its Indonesian acronym FPI, has a long record of vandalizing nightspots, hurling stones at Western embassies and attacking rival religious groups. It wants the Islamic Shariah law to apply to Indonesia´s 230 million Muslims. The group has gained significant influence in recent years through humanitarian and charity work.