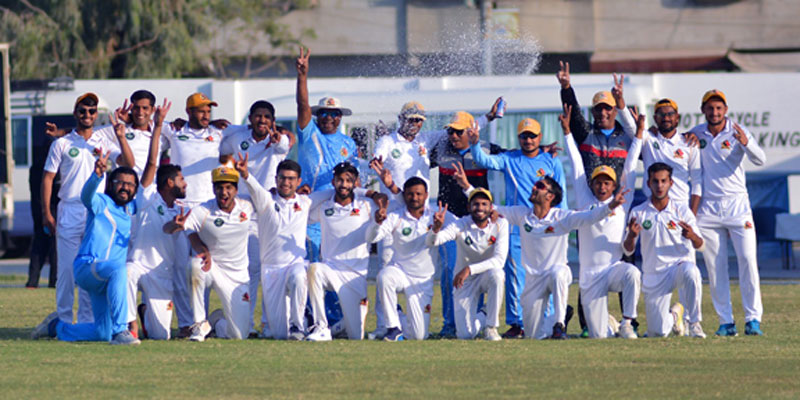 KARACHI: Sindh were declared the winners of the Second XI Quaid-e-Azam Trophy after topping the table with 48 points. On the third day of the tenth and final round match of the tournament, Sindh played out a drawn game with Balochistan. Meanwhile, Khyber Pakhtunkhwa who ended the tournament on second position defeated Northern by two wickets, while defending champions Southern Punjab who finished on fourth position played out a drawn game against Central Punjab.

Balochistan vs Sindh, KCCA Stadium, Karachi: Resuming their second innings on 48 for two with a lead of 116 runs, Sindh declared their innings on 222 for five in 59 overs. Syed Mohammad Tahami top-scored with a 126-ball 76, which included eight fours and a six. Rameez Aziz (54 not out, six fours, 98 balls) and Ammad Alam (46 off 33 balls) were other significant contributors to Sindh’s batting. For Balochistan, Zainullah took three wickets for 56 runs. Chasing 291 to win, Balochistan managed to score 120 for two in 33 overs when stumps were drawn. Awais Zia remained unbeaten on 52 off 76 balls, laced with four fours and two sixes.

Northern vs Khyber Pakhtunkhwa, TMC Ground, Karachi: Resuming their second innings on 279 for eight, Northern were bowled out for 281 in 68 overs. Aamer Jamal remained unbeaten on 135 off 109 balls. Asif Afridi took the remaining two wickets to fall, and ended up with six for 100 in 32 overs. In reply, Khyber Pakhtunkhwa chased down the 191-run target for the loss of eight wickets. Zohaib Khan top-scored with an unbeaten 48 off 84 balls, hitting four boundaries. For Northern, Mubasir Khan took three for 57 and ended up with match figures of nine for 141. Farhan Shafiq and Mehran Mumtaz took two wickets apiece.

Central Punjab vs Southern Punjab, NBP Sports Complex, Karachi: Resuming at their overnight second innings score of 171 for three, Central Punjab were bowled out for 311 runs in 71.3 overs. Mohammad Irfan Khan top-scored with a 95-ball 61, hitting seven fours and a six. For Southern Punjab, Ali Usman and Mohammad Irfan took five wickets apiece. Chasing 236 runs to win, Southern Punjab openers provided a solid 101 runs for the first wicket. Anas Mustafa top-scored with 56 off 59, while Waqar Hussain struck six boundaries in his knock of 51 from 117 balls. After the departure of opening pair, Southern Punjab managed to score 211 for four in 49 overs when stumps were drawn. For Central Punjab, Mohammad Ali took two wickets for 62.

At the conclusion of the tournament, Sindh topped the table with 48 points from 10 matches (five wins, one loss, and four draws). Khyber Pakhtunkhwa with 45 points remained second with five wins, two losses, three draws. Central Punjab and Southern Punjab remained on third and fourth position, respectively, while Northern and Balochistan finished the tournament on fifth and sixth position, respectively. Central Punjab’s right-handed batsman Imran Dogar topped the batting chart with 596 runs from 10 matches at an average of 31.37. He scored one century and three half-centuries. In bowling, Southern Punjab’s slow left-arm spinner Ali Usman picked 74 wickets from 10 matches. His best bowling figures in an innings was eight for 57. On eight occasions he picked five wickets in an innings.