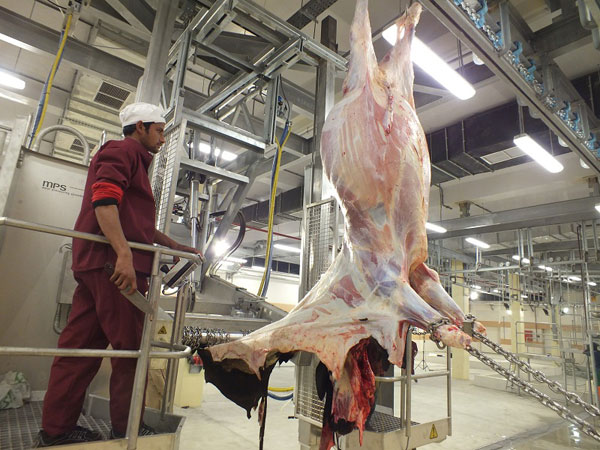 According to the report, China, reflected in high domestic prices, the overall demand for beef remains strong. Recently, efforts are being made to help Pakistan beef enter China.

“There are already many smart people in the Chinese city of Chengdu who want to develop slaughterhouses in Pakistan,” said Mahmood Akhtar, deputy consul general of Pakistan in Chengdu.

He told Gwadar Pro that the quarantine authorities in Beijing are likely to visit Pakistan and see the slaughterhouse there.

“Because Pakistan is not so advanced in slaughter technology and farming, with the help of Chinese investors in Pakistan, they can secure the disease-free animals and provide the modern techniques of slaughtering and preservation of the meat and the cold chain.”

We already sent a lot of business people who are interested, and they are looking forward to finding the right partners because it’s a completely new development in need of local partners who are familiar with the local environment, ” he said.

“To export Pakistan beef to China, the most difficult issue is the FMD, the breeding conditions there do not meet our requirements,” said Li Hongwu?president of Pakistan Sichuan Chamber of Commerce.

They have been making effort to bring slaughterhouses to Pakistan for a long time.

The export of fresh products also requires the construction of supporting facilities such as cold storage.

However, Pakistan’s electricity supply was unstable before. “According to Li Hongwu, the member companies of PSCC planned to go to Pakistan at the beginning of this year to open up the entire beef export chain from breeding to marketing, and gradually solve the existing problems, but the plan was suspended due to COVID-19.

“The breeding industry in Pakistan is still in a primitive stage without large-scale and modernization. To meet the export standards, We can provide technical guidance and equipment and open the export market.

But we still need to cooperate with many local companies, since we can not bring workers from China. There is still a long way to go,” he added.

Meanwile, according to another report, Pakistan exports to China has increased by 30% during last month, resulting in the improvement of trade balance between the two countries.

To address issue of trade deficit, the major concern of Pakistani side, China has proactively taken a lot of measures to maintain a balanced trade relation with Pakistan between the two sides.

The report says, China is keen to expand more market access for Pakistani products and organizes varieties of trade promotion activities in Pakistan and China every year.

Adviser to Prime Minister for Commerce and Investment Abdul Razzaq Dawood had stated in a tweet that during Nov 2020, Pakistan’s exports to China increased considerably.

This healthy trend is an indication that our exports are re-gaining their momentum. It was advised that the exporters should aggressively market their products in geographically diversified areas.

Giving a good start, the governments of the two countries had slashed tariffs on more than 300 categories of imported items that are widely used as raw material for the export of goods.

According to the report, along with the constant upward trend of China-Pakistan trade, a rising concern on trade deficit with China had been echoing in the Pakistani business communities.

It is pertinent to mention that the main reason behind the trade imbalance has to be the structural problems in nature between industries of two countries.

China has a strong manufacturing base to export goods as compared to import. Up to now, China turns to be the largest trading partner of more than 120 countries and regions in the world, and China has never intentionally pursued the trade surplus, not with any trade partner.

Therefore, It is time to dedicate some technical and financial resources to drawing a full map to determine how exports to the entire world, and more specifically to China, can grow. It is up to the subject specialists to come up with viable options for reducing Islamabad’s trade deficit with Beijing and improve trade balancing, the report added.