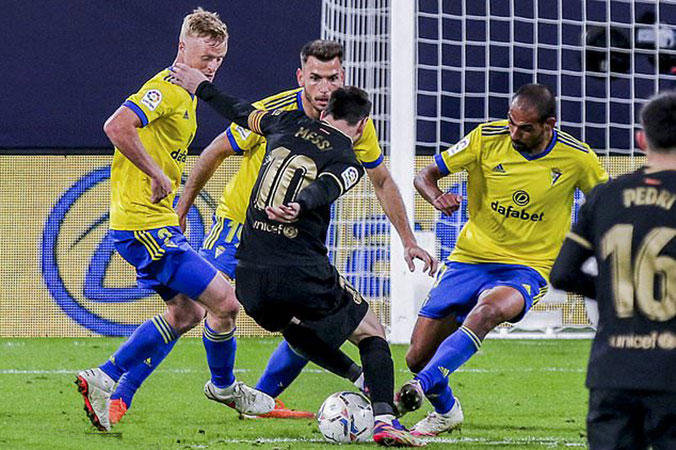 MADRID: After Zinedine Zidane got some relief seeing Real Madrid end a winless streak in the Spanish league, Ronald Koeman was back under fire after another disappointing Barcelona loss.

Atlético moved two points ahead of Real Sociedad, which visits Alavés on Sunday and has played one game more than Atlético. Third-place Real Madrid is six points off the lead and also has played one extra game compared to Simeone’s team. Seventh-place Barcelona is now 12 points back. “This was a huge step backward for us in the fight for the league title,” Koeman said. “It’s disappointing. A difference of 12 points against a team like Atlético is a lot.”

Atlético, which has already beaten Barcelona this season, visits Real Madrid next weekend.

Barcelona lost in the league for the fourth time this season despite the return of Lionel Messi, who had been rested in the team´s Champions League midweek match.

Barcelona was trying to win its fourth consecutive match in all competitions but paid the price for a defensive mistake in the second half.

Clément Lenglet misplayed a ball inside the area and goalkeeper Marc-André ter Stegen wasn´t able to fully clear it, allowing Álvaro Negredo to easily find the open net and give Cádiz the win in the 63rd. Cádiz had opened the scoring with Álvaro Giménez Candela following an eighth-minute corner kick, and Barcelona equalized in the 58th with an own-goal by Pedro Alcalá while he tried to block a cross by Jordi Alba. Cádiz, which was yet to win at home this season, moved to fifth place.

Thomas Lemar scored with a tight angled shot in the 56th and Marcos Llorente added to the lead after a nice run in the 72nd to keep Atlético’s winning streak in the league.

The team has conceded only two goals in 10 league games and and remains the only unbeaten side in the competition.

The match in Madrid marked the return of Luis Suárez, who hadn´t played with Atlético since November because of the coronavirus. The former Barcelona striker had tested positive for COVID-19 while with Uruguay´s national team. Valladolid was winless in its first eight matches but was coming off two victories and a draw in its last three games. The team owned by former Brazil striker Ronaldo is 19th in the 20-team standings.

Madrid arrived in Seville with Zidane under pressure after the team had won only one of its last five matches in all competitions. It had lost two of its last three league games.

“This victory is very important to restore our confidence,” Vinícius Júnior said. “We had played well in other matches but couldn´t get the victory. This has been a different season and sometimes it´s difficult to get going. We have to keep improving.” Madrid and Sevilla were coming off tough losses in the Champions League – Madrid lost 2-0 at Shakhtar Donetsk on Tuesday, while Sevilla was routed 4-0 at home by Chelsea on Wednesday. Sevilla, which dropped to sixth place, had won three straight in the league, including the last two at home.

Madrid had never gone four straight matches without a win in the league under Zidane.

Vinícius Júnior helped put Madrid on the board after a cross by Ferland Mendy from the left flank in the 55th. The Brazilian forward redirected the ball with a soft touch and it hit Bono before going into the goal.

Levante won 3-0 at home against Getafe, which finished the match with nine men after the sending off of José Manuel “Chema” Rodríguez in the seventh minute and Djené Dakoman in the 77th.

Levante, which had drawn its last five matches 1-1 and was in the relegation zone, scored with Roger Martí in the fifth minute, Dani Gómez in the 17th and Jorge de Frutos in the 57th.