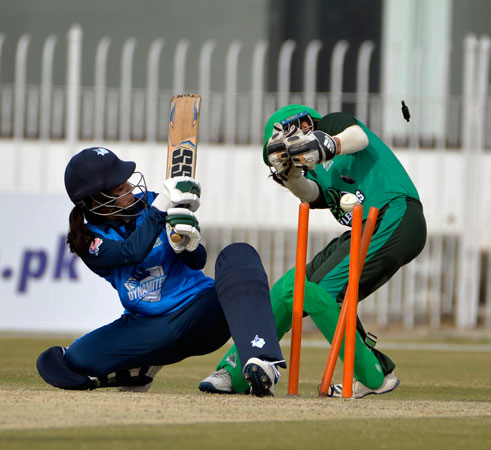 RAWALPINDI: PCB Challengers defeated PCB Dynamites in the sixth match of the National Triangular T20 Women’s Cricket Championship being played at the Pindi Cricket Stadium here on Sunday. The match which was a rehearsal of sorts before Tuesday’s tournament final between the two sides turned out to be a one-sided encounter with PCB Challengers comfortably chasing down the 109-run target after an initial hiccup. PCB Dynamites did look in control at one stage of the match when they had reduced PCB Challengers to 51 for five before an unbeaten 59-run sixth-wicket partnership between Bismah Maroof (45 not out) and player-of-the-match Fatima Sana (30 not out) took the game in PCB Challengers’ favour. Bismah hit two fours and one six in her 43-ball innings, Fatima struck four fours in her 25-ball effort.

Kainat Imtiaz took two wickets for the losing side, Nashra Sandhu, Ramin Shameem and Diana Baig took a wicket apiece. Earlier, PCB Dynamites who were asked to bat first struggled to get going as they finished their quota of 20 overs at a below-par score of 108 for nine. Opener Nahida Khan with 26 runs off 24 balls (four fours) was the top-scorer. After a 44-run first-wicket partnership between Nahida and Ayesha Zafar, the PCB Dynamites innings subsided. Ayesha (18), Omaima Sohail (15) and Kainat Imtiaz (13) all reached double figures but failed to make most of their starts as the batting side failed to challenge the PCB Challengers bowlers. For PCB Challengers Saba Nazir, Aimen Anwar, Fatima Sana and Nida Dar took two wickets each.