At UN, Pakistan call for end of all unilateral sanctions 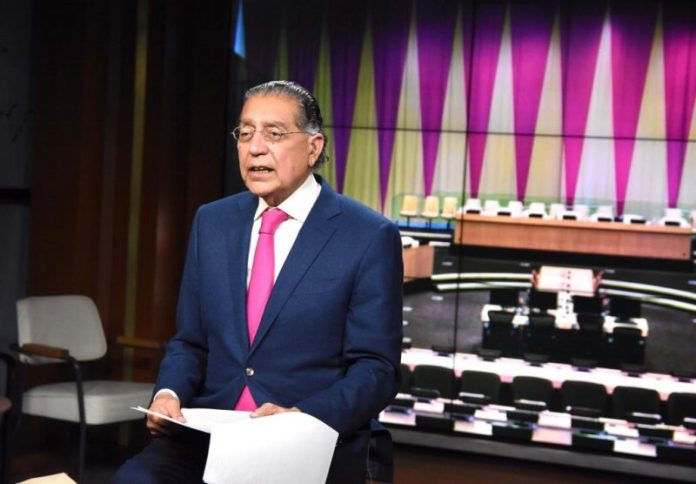 UNITED NATIONS: Pakistan has urged world’s powerful states to end the use of unilateral sanctions, saying such measures intensify food and health insecurities as well as destabilize the lives and livelihoods of millions of people in the targeted countries.

“We believe that unilateral coercive measures are contrary to the purposes and principles and the UN Charter and goes against the basic norms of international law, multilateralism and international relations,” Ambassador Munir Akram told an informal meeting of the Security Council on Wednesday.

The meeting on “End Unilateral Coercive Measures (UCMs) Now” was convened by five members of the 15-member Council — China, Russia, South Africa, Niger and Saint Vincent and Grenadines — under the format of Arria formula, which is named after a former Venezuelan ambassador to the UN, Diego Arriva. It is a very informal consultation process which affords members of the Security Council the opportunity to hear persons in a confidential, informal setting.

The Pakistani envoy said that unilateral sanctions generally ignored humanitarian impacts, despite contrary claims by those applying them. “They also seriously impact the ability of sanctioned States to utilize their full potential to realize globally agreed targets and frameworks such as on sustainable development and climate change,” he said.

“The assumption that one actor, or a small group of actors, can be allowed to unilaterally employ coercive methods – often on the whims of their governments or leaders, or in attempts to pursue narrow policy objectives – contravenes the principle of collective security which is at the heart of the world order established after the Second World War,” Ambassador Akram said, adding that the UN was created precisely to check such abuses of power.

The proponents of UCMs, he said, often exacerbate the situations further, making problems more complicated, and more difficult to resolve, therefore intensifying the threats to peace and security rather than ease them.

The General Assembly and the Security Council, he said, have recognized that people should not be deprived of their means of subsistence, especially food and medicines even where Council’s enforcement action may be required.

Unilateral sanctions were all the more abhorrent when deployed to secure unjust and unauthorized discriminatory and narrow national objectives of one or more powerful states, the Pakistani envoy said.

“As we fight a common enemy, the COVID-19 pandemic, that knows no borders and threatens us all alike, it is grotesque that millions of people in some of the victimized countries confront the double jeopardy of unilateral coercive measures arrogantly imposed by those who wield military and financial power in our unequal world order,” Ambassador Akram said.

“We urge an immediate end to the unilateral coercive sanctions which have negative impacts on health care and the human rights of vulnerable peoples.”

Pakistan’s position on this issue, he said, was guided by international law and principles of fairness, justice and impartiality.