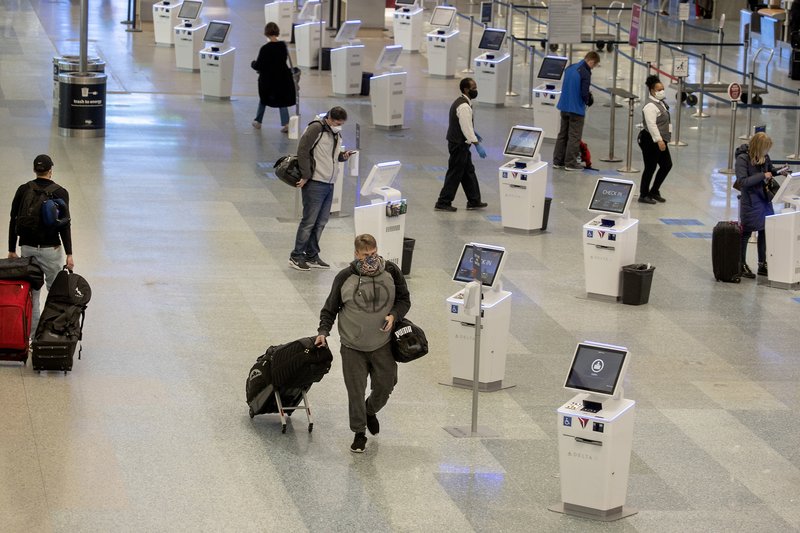 NEW YORK CITY: About 1 million Americans a day packed airports and planes over the weekend even as coronavirus deaths surged across the US and public health experts begged people to stay home and avoid big Thanksgiving gatherings.

And the crowds are only expected to grow. Next Sunday is likely to be the busiest day of the holiday period.

To be sure, the number of people flying for Thanksgiving is down by more than half from last year because of the rapidly worsening outbreak. However, the 3 million who went through US airport checkpoints from Friday through Sunday marked the biggest crowds since mid-March, when the COVID-19 crisis took hold in the United States.

Many travelers are unwilling to miss out on seeing family and are convinced they can do it safely. Also, many colleges have ended their in-person classes, propelling students to return home.

Laurie Pearcy, director of administration for a Minneapolis law firm, is flying to New Orleans to attend her daughter’s bridal shower and have a small Thanksgiving dinner with her son.

Stephen Browning, a retired executive from Tucson, Arizona, will be flying to Seattle for Thanksgiving with his sister. The celebration usually has up to 30 people; this year only 10 are coming, and everyone was asked to get a coronavirus test. He doesn’t plan on removing his mask to eat or drink on the flight.

“This is my first flight since December 2019, so yes, I have concerns,” he said. “But I think most airlines are acting responsibly now and enforcing masks on all flights.”

Last week, the Centers for Disease Control and Prevention urged Americans not to travel or spend the holiday with people outside their household.

New cases of the virus in the US have rocketed to all-time highs, averaging more than 170,000 per day, and deaths have soared to over 1,500 a day, the highest level since the spring. The virus is blamed for more than a quarter-million deaths in the US and over 12 million confirmed infections.

“There is so much community transmission all over the United States that the chances of you encountering somebody that has COVID-19 is actually very, very high, whether it’s on an airplane, at the airport or at a rest area,” said Dr. Syra Madad, an infectious-disease epidemiologist for New York City hospitals.

The nation’s top infectious-diseases expert, Dr. Anthony Fauci, told CBS’ “Face the Nation” that people at airports “are going to get us into even more trouble than we’re in right now.”

The message may be sinking in for some.

Bookings in 2020 are down about 60% from where they were this time last year. Thanksgiving reservations were ticking upward in early October but fell back again as case numbers surged. Since airlines have made it easier to cancel tickets, there could be a rash of cancellations closer to the holiday, said John Elder, an adviser to airlines from Boston Consulting Group.

In 2019, a record 26 million passengers and crew passed through US airport screening in the 11-day period around Thanksgiving. This year, the industry trade group Airlines for America isn’t even providing a forecast because things are so uncertain.

Because of tighter restrictions by many governments, air travel in other parts of the world has, in contrast, come to a near standstill. In Europe, traffic between countries was down by 83% in September from a year earlier, and that has only worsened since then because many countries imposed new limits.

Alejandro Zuniga and his fiancee, Megan Muhs, who live in Costa Rica, thought briefly about flying to Wisconsin for Thanksgiving to see Muhs’ family but decided against it. They also nixed a trip to the US in December.

“No part of a major international trip seems safe at this point,” Zuniga said. The pair plans to make video calls to family and stream the Detroit Lions football game on Thanksgiving Day.

Josh Holman and his family were planning to fly to Lake Tahoe and spend Thanksgiving with his brother, who lives in San Francisco, and his parents, who live in North Dakota. But they scrapped those plans.

“I see it as my civic duty not to spread this virus further,” said Holman, an assistant county prosecutor who lives outside Detroit.

More people tend to drive than fly over Thanksgiving, but even car travel is expected to see a drop-off, according to AAA. Based on surveys in mid-October, the association was expecting 47.8 million people to drive to Thanksgiving gatherings, down 4% from last year. But AAA said the drop could prove to be even bigger, given the worsening crisis.

Brad Carr and his wife, retirees who live in Griffin, Georgia, debated whether to drive 35 miles north to his son’s house for Thanksgiving and eat at a separate table on the porch. But after the CDC’s announcement, they decided to stay home. Carr’s son will deliver their meal “a la Uber Eats,” Carr said.

Those who do gather should eat outdoors, wear masks, stay 6 feet apart and have one person serve the food, the CDC said.

That’s the plan for Juliana Walter’s family. Walter, a student at the University of Tampa, plans to get a coronavirus test and then drive home to Maryland. Her parents have rented tents and outdoor heaters and will host up to 30 masked family members for Thanksgiving dinner.

The holidays close out a bleak year for US travel. Travel spending is expected to drop 45% from 2019 levels, to $617 billion, according to the US Travel Association, a trade group.

Canceling Thanksgiving trips is painful for many families.

Kelly Kleber usually flies from Seattle to her hometown of Tucson, Arizona, to spend the holiday with her parents. They have a picnic to celebrate the life of her sister, who died on Thanksgiving in 2015. This year, Kleber is sending her parents a portrait of her sister and plans a video call on Thanksgiving.

“It’s going to be hard being away from family this year,” she said.