* Most people do not consider Tenerife a destination for walkers: it's the beaches, infinity pools and tapas that attract the crowds 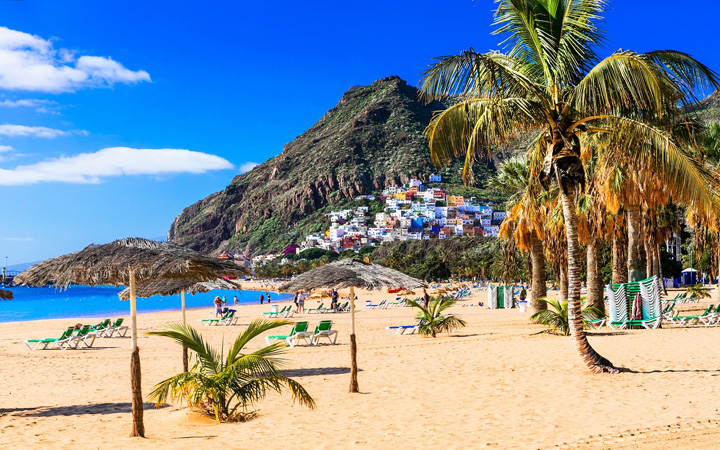 Up above, the Milky Way twinkled. Down below, I was taking a stroll across the rugged terrain of Teide National Park in the heart of Tenerife, spellbound by the clarity of the heavens in the Atlantic night sky.

What a way to go for a post-prandial wander after a day’s hiking on this dramatic volcanic mountainside, while staying 6,500 ft above sea level at the fabulously remote, lodge-style Parador de Canadas del Teide.

Most people do not consider Tenerife a destination for walkers: it’s the beaches, infinity pools and tapas that attract the crowds.

caminoways.com has launched an offshoot, canariaways.com, which features self-guided hikes with accommodation in Gran Canaria and La Gomera as well as in Tenerife.

Mine was the challenging Grand Walking Tour of Tenerife — and my favourite part was the Parque Rural de Anaga.

Starting from a rainforest-esque laurisilva (laurel forest), I soon arrived at the whitewashed hamlet of Taganana, where there was the chance for a brief catch-my-breath break at a lively little bar.

But Camino de Santiago specialist caminoways.com has launched an offshoot, canariaways.com, which features self-guided hikes with accommodation in Gran Canaria and La Gomera as well as in Tenerife

With salsa-like carnival music ringing in my ears, I continued down a coast path to a stony beach — a great spot to cool off with a dip in the rockpools, as the Atlantic was at its most capriciously feisty.

Then the trek up from the sea led to a ravine and another charming hamlet, Afur, where yet more refreshment awaited. Ice-cold Dorada lagers at 89p a bottle? What’s not to like after a sweaty tramp across the hilly landscape?

The trick is to start early to avoid the crowds on this magnificent circular trek. For a couple of hours, I just about had the path to myself. Pure, silent joy.

This is a place to think back to the days before the Spanish conquest of the 15th century — Tenerife then was populated by the Berber-descending Guanches who believed the 12,188 ft Teide volcano harboured a devil.

But there is little menace now to the Teide, as it’s lain dormant for some time.

One of the gentlest walks involved navigating the cobbled streets of the former capital: San Cristobal de La Laguna.

The original 1496 map of La Laguna became the template for many Caribbean cities, including Cuba’s Havana.

After climbing the 99 steps of the Iglesia de la Concepcion’s tower, you can see the green patch of erstwhile lagoon from which the city takes its name.

All this walking builds up an appetite, which can be well satisfied at the Mirador de Garachico in Garachico town, which rose, phoenix-like, from the ashes of a devastating volcanic eruption in 1706.

Canariaways.com provides a holiday pack with maps and GPS data files, meaning you can lose yourself in the natural beauty of Tenerife, all without getting lost.