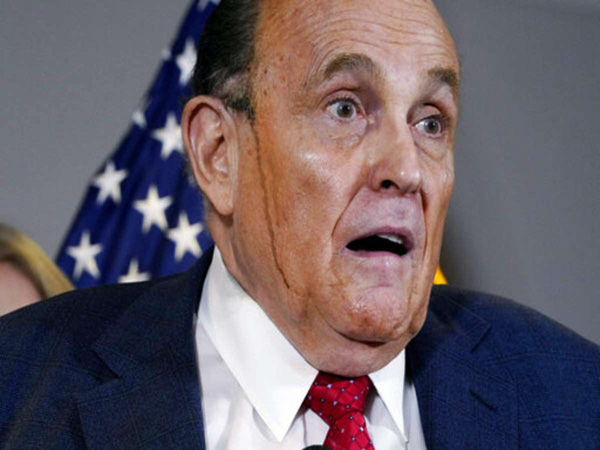 The hair coloring melting down the sides of his face while he declared long-dead Venezuelan caudillo Hugo Chavez caused President Donald Trump’s election defeat made one thing clear — Rudy Giuliani is no longer “America’s Mayor.”

The accolade Giuliani earned for his calm fortitude in leading New York City after the September 11, 2001 attacks has dissolved in a series of increasingly bizarre claims that Democrats, the media, and yes, the late Venezuelan dictator, had robbed Trump of reelection.

His press conference Thursday, pushing election conspiracy theories without any evidence, was Giuliani’s latest audacious, fact-shy display on behalf of Trump, who lost the November 3 election to Democrat Joe Biden but refuses to concede defeat.

“We cannot allow these crooks, because that’s what they are, to steal an election from the American people. They elected Donald Trump. They didn’t elect Joe Biden,” Giuliani said, ignoring Biden’s nearly six million vote margin over Trump.

And Chris Krebs, the head of US election security recently fired by Trump, called it “the most dangerous 1hr 45 minutes of television in American history. And possibly the craziest.”

According to the New York Times this week, Giuliani had asked to be paid $20,000 a day for his performances on behalf of Trump — though the same report said it was unclear how much compensation he would ultimately receive.

Money aside, Robert Polner, editor of a book on Giuliani, says that the once-feared federal prosecutor then New York mayor has always been a “restless political opportunist” for whom credibility was not a priority.

The 9/11 attacks set Giuliani up for bigger things, with one writer comparing his response to Winston Churchill.

But that may have been Giuliani’s finest hour.

He set his sights on a White House run in 2008, but a questionable primary strategy failed, as did his leaning on his September 11 credentials without developing a broader platform.

“There’s only three things he mentions in a sentence: a noun, a verb and 9/11,” said Biden, who that year sought the Democratic presidential nomination.

The 2008 loss left him adrift, but eventually his longtime New York friend and political ally Trump offered a way forward. “Giuliani saw a path to power as a result of his friendship with Trump, and never looked back,” said Polner.

His energy and willingness to defend Trump on anything made him essential.

When an embarrassing tape threatened to kill Trump’s 2016 chances, Giuliani did a marathon of television interviews to explain it away, effectively neutering the problem. After the election Trump didn’t reward his wish to be named secretary of state, but Giuliani hardly suffered.

He earned millions of dollars from countries and companies needing a lobbyist with a direct line into the Oval Office. In early 2018 the president hired him to help fight against the Mueller investigation.

With a Trump-like flair for showmanship, Giuliani became a constant presence on television defending the president and accusing investigators and the media of corruption and bias.

Tireless, he often spoke so much he would contradict what he said moments before, or, as in August 2018 on NBC, defend the president with remarkable statements like “Truth isn’t truth.”

Anticipating Biden would run against Trump in 2020, in late 2018 Giuliani led an effort to find dirt on the Democrat and his son, who had done business in Ukraine.

Based on what Giuliani claimed to find, Trump froze aid to Ukraine, telling the country’s president to hand over alleged evidence of Biden’s corruption.