Pakistan must benefit from China’s achievements in agri sector: envoy

* Ambassador says under CPEC Phase-II, agriculture cooperation has been included as part of socio-economic development strategy 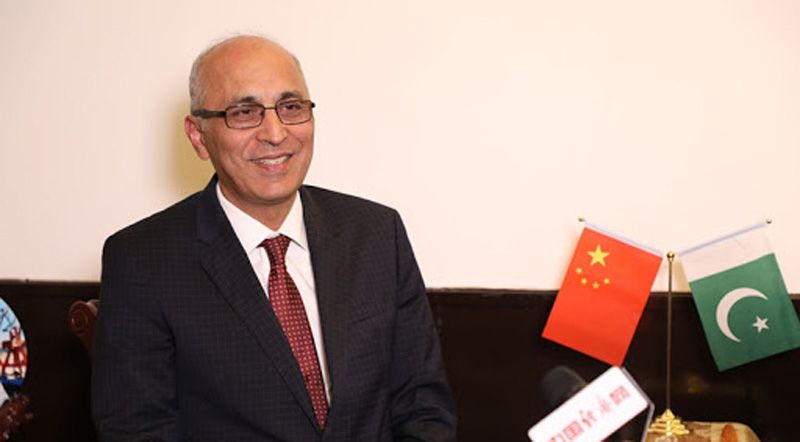 Pakistan can make optimum use of past achievements of China in its future agriculture development schemes to address weaknesses and develop the agriculture sector, Pakistan Ambassador to China, Moin ul Haque said on Thursday.

“I believe that Pakistan can make optimum use of China’s past achievements in its future agriculture development schemes to address our weakness and consolidate our strength in the agriculture sector,” he said in his opening speech at a Webinar on China-Pakistan Agricultural Cooperation and Prospects organized by China Economic Net (CEN).

Terming the relations between Pakistan and China as very close and strong, he said that spectrum of bilateral relations between the two countries is very broad, deep and wide. Under President Xi Jinping’s Belt and Road Initiative, the China Pakistan Economic Corridor (CPEC) has emerged as the flagship, high quality and demonstration project, helping Pakistan in upgrading its infrastructure, energy sector transport and communication network. Now in the recent years, the agriculture has been identified as the sector to be given a special attention.

Ambassador Haque said, under the CPEC Phase-II, the agriculture cooperation is included as part of socio-economic development strategy.

He said, special working group on agriculture was established in March this year and plan of action has been discussed between Pakistan’s Ministry of National Food Security and Research and the Chinese Ministry of Agriculture and Rural Affairs were implementing large number of joint projects, adding, For the government of Pakistan, modernizing our agriculture sector remains a priority.

Pakistan, he said, has a strong agriculture base which contributes more than 80 percent of our GDP and employs more than 30 percent of our labour force. Pakistan is a leading country in production of wheat, cotton, rice, sugar cane, lentils and mangoes, and milk. In fact, we are the fourth largest producer of the milk. We also have a vibrant livestock sector and we are among the leaders in meat and poultry production, he added. In the recent meeting held in Hainan in August between our foreign ministers, the agriculture cooperation was extensively discussed.

He said, cooperation was stressed in areas like production of quality seeds, enhancing productivity of various crops, strengthening the agro based industry to bring more value addition, manufacturing pesticide and setting up cold chain networks. We also discussed capacity building, transfer of technology and establishment of research institutes, he added.

Ambassador Haque informed in September, Foreign Minister Shah Mahmood Qureshi also held an exclusive meeting with the Chinese ambassador in Islamabad to discuss cooperation in the field of agriculture.

He expressed the confidence remarked that through mutual collaboration, sharing of experience and consistent efforts, our two countries can strengthen cooperation in agriculture sector and contribute toward prosperity of our two people.

Ambassador Haque pointed out that China is also helping Pakistan to set up a pest disease and control center in Karachi and a memorandum of understanding for which was signed during President Dr. Arif Alivi’s solidarity visit to China in March this year.

Acknowledging China’s unprecedented success in combating poverty, he said, bringing more than 700 million people out of poverty is a miracle in recent time. He said, helping communities to improving livelihood through developing a local agriculture produce and better planning and marking has been an important part of China’s poverty alleviation strategy. Pakistan, he said, will like to learn from Chinese experience as it is important for its own quest for poverty alleviation. Ambassador Haque expressed his sincere gratitude for CEN and its president for providing valuable support in strengthening economic and commercial relations between China and Pakistan.

He proposed to organize another forum to discuss linkage between poverty alleviation and agriculture. He also appreciated CEN for sponsoring mango festival, holding seminars and conferences and hosting of Pakistan Pavilion at China International Import Expo held in Shanghai early this month. Ambassador Haque congratulated Nong Rong for assuming charge of the Chinese Ambassador to Pakistan. The two-hour long webinar was addressed by ministers, senior government officials and experts from the two countries.