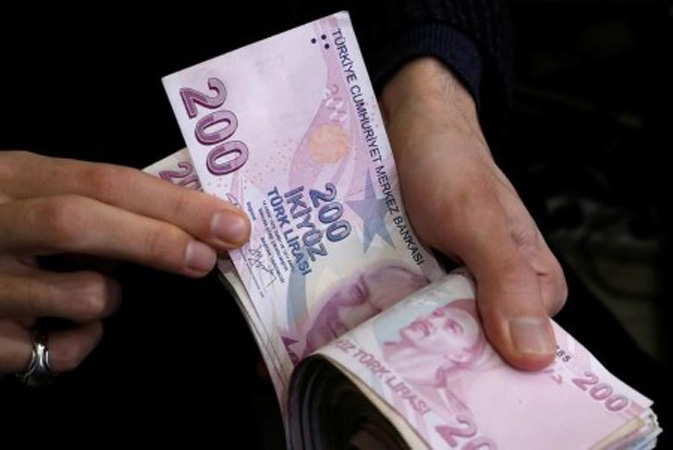 The Turkish lira eased on Wednesday after the imposition of tighter coronavirus restrictions, while investors looked ahead to a central bank meeting on Thursday on hopes of a sharp interest rate hike that could temper rising inflation. The lira staged a sharp rebound last week after plunging to record lows this year, on optimism that Ankara would follow more orthodox policies after a leadership overhaul and market-friendly comments from President Tayyip Erdogan. The currency weakened 0.5% to 7.709 per dollar at 0838 GMT underperforming most of its peers in Europe, the Middle East and Africa for the day, but Turkish stocks jumped more than 1% boosted by solid gains in the financial sector. The introduction of partial lockdowns on weekends and new virus curbs in the tourism-dependent economy dampened risk appetite, but the focus remained on the crucial rate decision at the first central bank meeting under new governor Naci Agbal. The bank is expected to hike its policy rate to 15% on Thursday from 10.25%, according to a Reuters poll. Adam Cole, Chief Currency Strategist at RBC Europe, said the Turkish central bank could not walk away from this meeting without a rate hike, but he said it would not be surprising “to see the CBRT deliver less than market expectations and the market remain positive on the lira in the near term”. Other regional currencies, strengthened against a broadly weaker dollar, with Russia’s rouble leading gains, as it benefited from a rise in global crude prices, the country’s main export item. Government bond auctions were also in focus, with the Russian finance ministry offering three OFZ treasury bonds later on Wednesday. South Africa’s rand advanced 0.5% ahead of its central bank meeting on Thursday, with the South African Reserve Bank expected to leave the repo rate at a record low at its meeting on Thursday and over the coming year too, as inflation is expected to quicken in coming months. Central European currencies ticked higher against the euro, with the Polish zloty and Czech crown rising 0.4% and 0.2% each. Markets have barely reacted to Hungary and Poland blocking the adoption of the 1.1 trillion euro 2021-2027 EU budget and recovery fund on Monday over a clause which makes access to money conditional on respecting the rule of law. “It is difficult to imagine that Poland and Hungary will object long-term, seeing that they will benefit massively from the EU payments,” Antje Praefcke, FX &amp; emerging markets analyst at Commerzbank, wrote in a note.