* Of the four sites that awed us the most was the Kot Diji Fort, a historic site in Khairpur district, Sindh 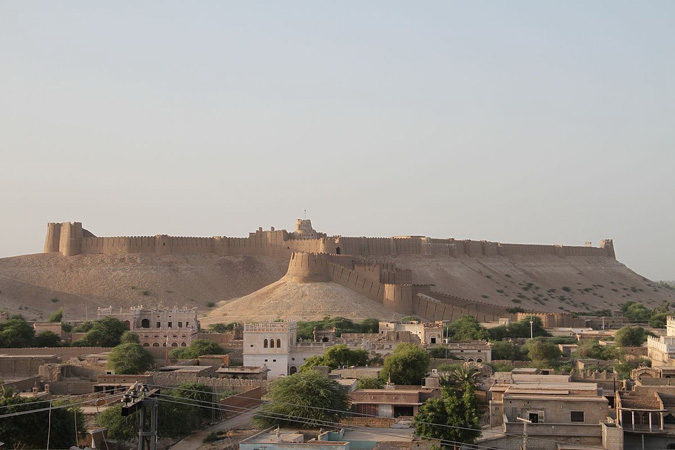 Sindh, like other provinces of Pakistan, has a plenty of historic sites to attract tourism. It is home to one of the oldest civilization of the world, the Indus valley civilization. To explore the historic and tourist sites of Sindh, I along with a few friends took a tour of the upper Sindh and visited four historic sites of upper Sindh.

Of the four sites that awed us the most was the Kotdiji Fort, a historic site in Khairpur district, Sindh. When we entered the premises of Kotdiji Tehsil, the fort was conspicuous from about miles. When we reached it, we were amazed to see the giant fort. The majesty of the fort was dazzling. We marveled at its splendor. Upon reaching the gate, we saw an elephant proof gate. It was 13 feet high and 10 feet wide. The gate being built of wood contained iron spikes so as to make it immune to the attacks of the enemy. This way the fort seemed impossible to be penetrated. After entering the fort, we found the ground spacious. But our curiosity did not die down as we saw a narrow, ascending path leading to another level of the fort. We followed that path at a brisk pace. It led us to the second layer which also contained the same elephant proof gate as the first one. The second level seemed quite secure. If the first level was attacked and penetrated, breaking into the second level would not be an easy task. After spending some time there, we headed towards the third, last level of the fort. The third level also contained an elephant proof gate, called Shahi Darwazo. It overlooked the town of Kotdiji. Standing on the walls of the fort presented beautiful scenery. We were mesmerized by the scenic beauty of the greenery and date palms outside the fort. The date palms stretched to the horizon on the western side; while as for the eastern side, there were hills as far as eye could see.

?Unfortunately, there was no man learned enough to brief us about the fort. However, much to our relief we found a board inside the fort which contained brief but comprehensive history of the fort. It stated that Kotdiji fort was formerly known as Ahmadabad fort. It was built in the late 18th Century by then ruler of Sindh: Mir Suhrab Khan Talpur. Its work lasted for about a decade, from 1785 to 1795. It lies about 25miles east of Indus River. It was built of kiln backed bricks on a hill 110 feet high with 30 feet high walls. The walls of the fort had been segmented by about 50 bastions. The walls and bastions have arrow slits which allowed defenders to attack their enemy with maximum security. Moreover, it contained watch towers and ammunition depot. The fort is not a big one, it has only 1.8kms perimeter, yet it seemed one of the safest forts. With masterly and wise planning the fort remained invincible throughout its history.

?While the fort was magnificent, there was not a good of visitors. The number of visitors present there was not more than few dozen. Given the beauty and magnificence of the fort, I was disappointed to see such a little number of visitors. The most probable reason behind such low turnout could be the lack of facilities available there. There was no facility to speak of. I could not find even a restaurant there, let alone rest rooms. Even the link road that connects the fort to the main road was dusty. Vehicles running on the road left behind so much dust that it made the trail invisible for some time. Overall, the fort did not look a recreation site due to lack of facilities.

Like said earlier, Sindh has the potential to become a tourist hub. All that needs to be done to realize this potential is some efforts on the part of the government as well as people. In order to promote tourism, the government should provide visitors with all possible facilities. It should design such places in way that makes visitors feel comfortable and satisfied, because people visit these sites for recreation. Their enjoyment can be increased by provision of facilities.

Tourism is looked on as one of the vital factors in terms of economical development. Nations all over the world are working on their tourism sector in order to enhance it. According to World Travel and Tourism Council (WTTC), Travel and Tourism account for 10.3 percent global GDP. Also, a research report of WTTC in 2018 stated that Travel and Tourism contributed to 2.9 percent of GDP of Pakistan, which was Rs 930.9 billion at that time. This shows that tourism is a significant component of a country’s GDP. Thus, historic sites, such as Kotdiji Fort can prove an asset to promote tourism at both regional and national levels, as well as international level.