* The short film titled ‘Chambeli’ is an amalgamation of mystery, suspense, drama and deceit 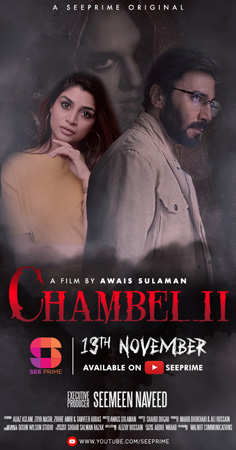 With 2020 approaching its end and the Coronavirus pandemic still on the rise, See Prime – the digital platform has kept the viewers entertained with the release of new content.

Coming back with another thrilling short-film for its viewers that shows how this time might have taken a toll on all aspects of life – the platform has released a new short feature with Aijaz Aslam and Zoya Nasir in the lead.

The short film titled ‘Chambeli’ is an amalgamation of mystery, suspense, drama and deceit. It depicts the life of a couple who in order to escape the boredom of COVID lockdown decide to go to a guest house for a weekend getaway. What follows is an exhilarating and horror filled stay at the ‘haunted’ guest house where the couple turns on each other to scare the partner with the story.

Penned by Shahid Doger, the short film has been co-produced by Mahib Bukhari and Ali Hussain. The short-film is directed by Awais Sulaiman and stars Aijaz Aslam and Zoya Nasir in the lead and Zohreh Amir and Tanvir Abbas in pivotal roles.

Talking about the latest release, the Executive Producer Seemeen Naveed said, “As the COVID pandemic struck everyone especially couples – we decided to show a story that will be quite relatable. Aijaz and Zoya have done a tremendous job in playing their characters with so much precision. “

Keeping the viewers preferences for content consumption, See Prime is streaming back to back original content and this latest release ‘Chambeli’ has been released on 13th November on See Prime’s YouTube Channel.