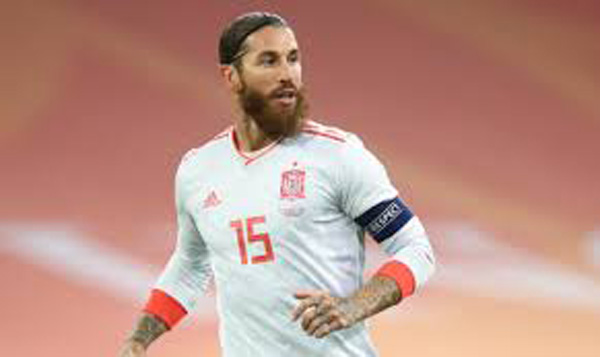 MADRID: Sergio Ramos is set to become the most capped European footballer of all time when Spain visit Switzerland in the Nations League on Saturday. The Spain captain, who last year became his country’s all-time appearance maker, is in line for a 177th match which will take him ahead of former Italy goalkeeper Gianluigi Buffon as the continent’s most capped player. Ramos, 34, will then set his sights on topping former Egypt player Ahmed Hassan’s record of 184 appearances and becoming the most capped international player ever.

“His numbers are only within the reach of super-gifted players,” said Spain coach Luis Enrique after Ramos equalled Buffon’s 176 appearances in Wednesday’s 1-1 draw with the Netherlands. “He never even gets a cold. The number of games he has played show he is different to the rest. We all recognise his achievement but we have to keep looking after him so he can keep playing for us.” Ramos made his international debut in a friendly against China in 2005, when Luis Aragones was in charge, and is the only surviving member in the current squad to win the Euro 2008 title which snapped Spain’s 44-year wait for an international trophy. He was also part of the team that won Spain’s first and only World Cup in 2010 and defended the European Championship title in 2012. He is the national team’s eighth all-time scorer, with 23 goals, swelling his goal tally in the last two years since becoming Spain’s first-choice penalty taker. An ever-present for Real Madrid, Ramos shows no signs of slowing down, however, and has stated that he wishes to play for Spain at the rescheduled Olympic Games next year in Tokyo as well as leading them into the European Championships in June.