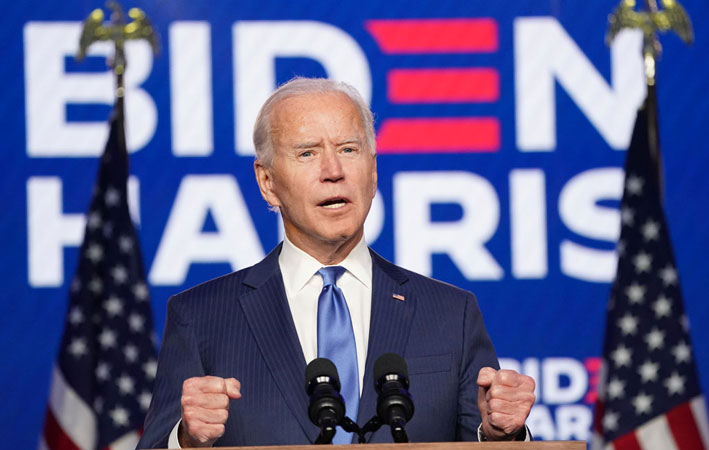 Democrat Joe Biden has been keeping a long wish list of actions he would take if had a chance to reverse the policies of Republican US President Donald Trump.

Now that Biden is headed to the White House after winning Tuesday’s election, here is a list of the some of the policies the president-elect and his team want to take “on Day One” or early in his four-year term in office slated to start on Jan. 20, 2021.

Biden has said his No. 1 focus is getting the coronavirus under control. He will push for masks to be worn nationwide, a change that health experts say could save thousands of lives, but his legal authority to enforce such a mandate is unclear.

He promises a new public-private partnership called a “pandemic testing board” that would be responsible for boosting production of coronavirus testing kits and lab supplies as well as coordinating access to those services. He also promised to make COVID-19 testing, treatment and vaccines free for all Americans.

Biden promised to undo many of the tax cuts Trump signed into law for corporations and wealthy individuals as soon as he takes office, though the changes require congressional approval. He vowed to increase enforcement of tax policies already on the books and also to quickly bolster workers’ unionization rights.

Within Biden’s first 100 days, he pledged to work on getting the Equality Act passed, a bill adding vast new anti-discrimination protections based on sexual and gender identity.

He is also expected to issue an executive order promoting diversity and inclusion in the federal government, and create a new White House Council on Gender Equality to coordinate policies relating to women.

Biden plans to send an immigration bill to Congress on his first day in office that includes a pathway to citizenship for the estimated 11 million immigrants living in the country illegally, a goal sought unsuccessfully by many US presidential administrations of both parties.

Apart from the legislation, Biden intends to reinstate the Deferred Action for Childhood Arrivals (DACA) program, which grants deportation relief and work permits to roughly 644,000 people living in the United States illegally after entering as children, known as “Dreamers.” Trump has reduced protections under the program.

Biden also promised to halt deportations during his first 100 days in office. He promised to sign an order creating a task force to reunite more than 500 children who were separated from their families at the US-Mexico border by the Trump administration and whose parents have not been located.

Biden has said that on his first day he would rescind Trump’s decision to abandon the World Health Organization – a move widely criticized internationally amid the pandemic – and quickly rejoin the Paris climate accord, a signature achievement of the Obama-Biden administration.