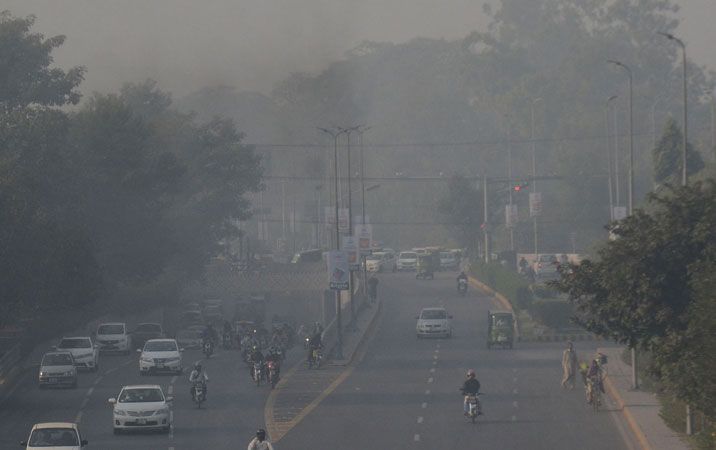 Talking to media over growing challenge of Smog in Pakistan, he pointed out that burning of rice crop residue, burning of dirty fuel sources in traditional brick kilns, solid waste burning, existing aging urban transport system, factories and are the typical causative factors of smog, which starts blanketing country’s various parts, particularly those in northern Punjab provinces, from November and continues till March, said a new release.

“However, smog, which is the worst form of the outdoor air pollution, would continue to devour the country’s gains in public health, environmental and economic sectors as long as these very sources of smog remain unaddressed,” he cautioned.

Referring to the recent introduction of the Rice Straw Shredder and Happy Seeder technology in Sheikhupura district on Friday, Aslam said the much-needed technology has been finally launched and being provided to the farmers, which would help avoid burning of the paddy crop residue and instead convert the residue into organic fertilizer for boosting fertility of their farmlands.

He informed that around hundreds of the pairs of rice straw shredder and happy seeder technology were being provided to the farmers under a joint multi-billion rupees initiative launched jointly by the Agricultural Engineering Division (Lahore) of the Punjab Agriculture Department and the Federal Ministry of Climate Change.

Rs 30 billion are being spent for disbursement of the 50,000 units of the rice straw shredder and happy seeder technology to the farmers to stem the stubble burning, which is among the key causes of smog in winter, Malik Amin Aslam elaborated.

He hoped, “Provision of the new technology would prove a great milestone of successful environmental governance by the present government and help quell exacerbating challenge of the smog, which also reflects the Prime Minister Imran Khan-led government’s commitment towards taming the smog and protect public health and environment from the heinous pollution.”

Dubbed as ‘the silent killer’, smog is composed of a mixture of air pollutants from the various sources that poses grave risk to the human health and environment. Various human health problems such as emphysema, asthma, allergies, chronic bronchitis, lung infections, coughing, irritation of the eyes, chest, nose throat infections and various cancers are caused or exacerbated by the effects of smog.

Various studies show that birth defects and low birth weights are other consequences of the smog problems.

“Smog is highly attributed to the issues of birth defects and low birth weight. Because, pregnant women, who get exposed to smog, have had babies with birth defects. Spina bifida – a condition depicting malformations of the spinal column, and anencephaly – underdevelopment or absence of only part of the brain are birth defects associated with smog exposure,” Malik Amin Aslam noted.

Quoting a study published in the journal of Proceedings of the National Academy of Sciences in 2018, he said that the study findings show that accumulative exposure to air pollution impacts intelligence. Another latest study, published in the journal of Epidemiology, has also linked exposure to air pollution from burning fossil fuels to brain cancer, he highlighted.

The prime minister’s aide Malik Amin highlighted that emissions from the transportation sector, which aggravate the outdoor air quality, result from fossil fuel combustion in cars, trucks, buses and motorbikes are the chief contributors of smog formation, most of which is formed in large cities of the country.

Besides, the industrial processes employ a large amount of fossil fuels and resources that need to be extracted for the production of materials and goods. Thus, industries equally cause harmful gaseous emissions and fumes released into the atmosphere, which leads to the formation of smog, he added.

He also insisted that burning of the agriculture field is among the top contributors of the smog problem in the country’s various parts, most of which comes from neighbouring India.

“Most of the smog issue in Pakistan is linked to widespread stubble burning in northern Indian states of Haryana, Punjab and Uttar Pradesh, where tens of thousands of farmers blaze their fields of old rice crop stubble to get the fields cleared of the crop residue materials including stubble and get them ready for growing wheat,” he remarked.