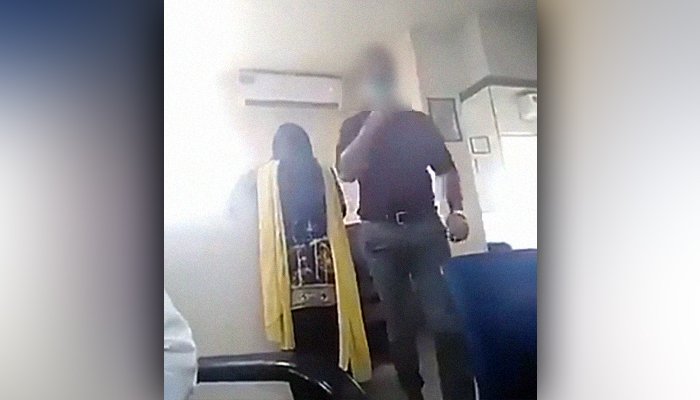 Police in Islamabad arrested on Saturday night a Faysal Bank employee who was caught groping a woman on camera.

According to details, a video of the incident went viral on social media, showing a man sexually harassing a woman at a bank in F-10 area of Islamabad.

Taking notice of the video, Inspector General of Police (IG) Islamabad Muhammad Amir Zulfiqar Khan took notice of the incident and directed the concerned officials to take action against the harasser.

A police team led by ASP Shalimar police station took action and arrested the accused, identified as Usman Gohar. “The accused is a credit manager at a private bank in F-10 area of the capital,” they said.

The prompt action promised by Hamza Shafqaat is great. However, it does raise the question: why does one have to record their ordeal of sexual harassment and then have it go viral for authorities to take action? It is incredibly disturbing that violence against women is so rampant within the country, but only cases that manage to go viral on social media are the ones taken seriously.

The recent case of Arzoo Raja, a young Christian girl who has been allegedly kidnapped and forcibly converted to Islam only gained momentum when people started posting about it on social media. However, the issue of forced conversions has been rampant in the country against young Hindu and Christian girls.