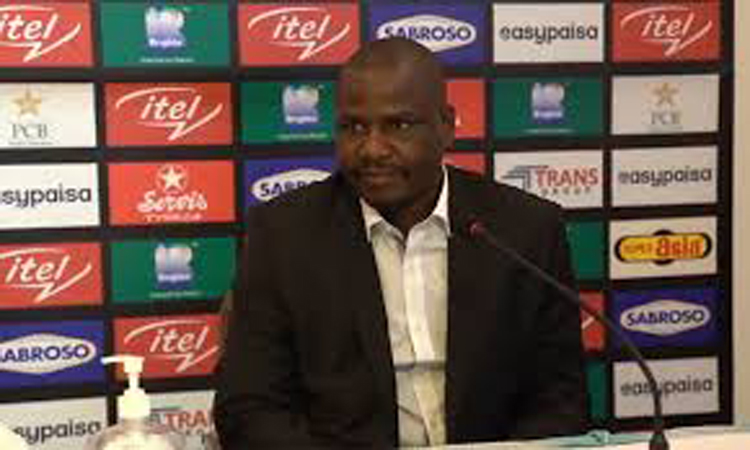 RAWALPINDI: Zimbabwe Cricket Chairman Tavengwa Mukuhlani has urged the international cricket bodies to appreciate Pakistan’s efforts for restoring international cricket. “The world must understand that Pakistan has done everything possible within its capacity to make sure that international cricket comes back to the country,” Mukulani said at a news conference along with Pakistan Cricket Board (PCB) Chairman Ehsan Mani at the Pindi Cricket Stadium. He said that the Zimbabwe squad were happy to be in Pakistan. “We feel at home, we are very comfortable and well looked after here,” he said, “The bio-secure bubble has been maintained very well.” Recalling Zimbabwe-Pakistan relations, he said that both countries had very special relationship not only in the field of cricket but on government level as well. “We share a long history not only cricket but other areas as well,” he said, noting the isolation faced by Zimbabwe in the past. “We are here to show solidarity with Pakistan and for international cricket as we have also gone through a phase of isolation,” he said.

To a query regarding Zimbabwe’s Indian coach Lalchand Rajput, who did not visit Pakistan for ongoing ODI and then T20 International series, Mukuhlani said that Pakistan Embassy in Zimbabwe had issued visa for coach, but on the request of the Indian Government, Rajput opted not to visit Pakistan. Mani appreciated Zimbabwe for their tour, while appreciating the performance of the visitors in the first ODI which was won by Pakistan on Friday. “They have huge potential,” Mani said, adding that Pakistan will tour Zimbabwe next year while there are also plans underway for sending the Under-19 and women teams to Zimbabwe.” The PCB chief added that England would possibly send a second-string side to the country for their tour in January next year with the first team to be visiting Sri Lanka at the same time.