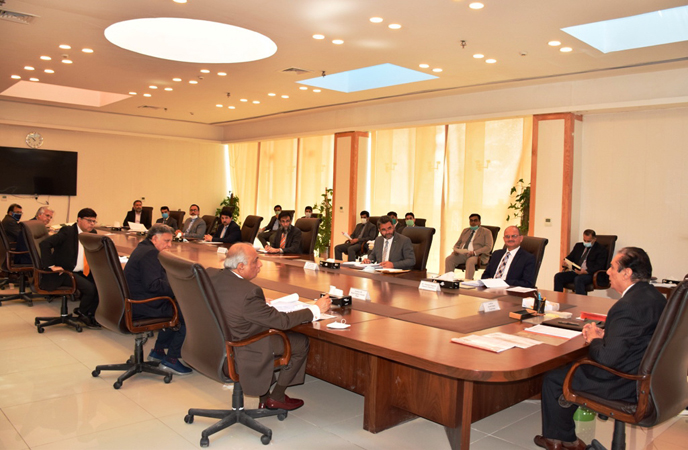 Justice Mr. Javed Iqbal, Chairman, NAB chaired a meeting to review the latest progress on the implementation status of the decisions and measures taken by the present leadership of NAB.

The meeting was attended by Deputy Chairman NAB, Prosecutor General Accountability (PGA) DG Operations, DG NAB Rawalpindi and other senior officers of NAB including all Director General of Regional Bureaus via video link at NAB Headquarters.

While chairing the meeting, Justice Mr. Javed Iqbal, Chairman NAB said that NAB is absolutely determined to eradicate corruption to make Pakistan corruption free. NAB’s Anti-Corruption Strategy has started yielding excellent results. He said that NAB has prescribed efficient, effective and expeditious disposal of white collar crimes cases putting a maximum limit of 10 months which is a record as compared to other Anti-Corruption Organizations. He said that NAB has established a state of the art Forensic Science LAB in Islamabad which has facilities of Digital Forensics, Questioned Documents and Fingerprint Analysis. During the meeting, Honourable Chairman NAB directed that performance review of NAB headquarters and all the Regional Bureau’s of NAB would be conducted at the end of the year at a given criteria under Quantified Grading System in order to further improve the performance of officers/officials of NAB as with better quantitative and qualitative improvements in Operational Efficiency Index, rationalized workload, clearly drawn job descriptions and institutional support and supervision.

Justice Mr. Javed Iqbal, Chairman NAB said that NAB is an apex anti corruption organization of the country which has assigned a gigantic task of eradication of corruption and to recover looted money from corrupt elements. Chairman NAB said that taking mega corruption cases/white collar crime cases to logical conclusion is top most priority of NAB. NAB strongly believes in conducting the inquiries and investigations of white collar crimes on scientific lines that too after collecting solid evidence as per law. During the meeting, it was informed by DG operations, that out of 179 mega corruption cases, NAB had filed 97 corruption references in different accountability courts, while 57 references had been taken to logical conclusion. Currently, out of 179 mega corruption references, 10 inquiries and 15 investigations are under process. He said that NAB attaches great importance to its Human Resource Management. A comprehensive yearly Training Plan for 2020 was approved in order to enhance capacity building of NAB officers/officials. He said Training Cells were created at all Regional levels as primarily responsible to liaise and carry out the planned activities in their respective Regional Bureaus in coordination with T&R Division NAB Headquarters who had successfully conducted training programs besides a Training of Trainers (ToT) program was also organized at NAB Headquarters. Honorable Justice Mr. Javed Iqbal, Chairman NAB said that the figures of complaints, inquiries and investigations have increased as compared to the same period of 2019 to 2020. The comparative figures of previous two years are indicative of the hard work being put in by all ranks of NAB officers/officials in an atmosphere of renewed energy and dynamism, where fight against corruption is being taken as a national duty. Increase in the number of complaints also reflects enhanced public trust in the NAB. The Chairman NAB said that NAB officers are considering eradication of corruption as their national duty. Serious efforts to combat corruption are being made with the realization that eradication of corruption from Pakistan. He directed all officers of NAB to demonstrate absolute fairness and transparency as per law in discharge of their national duties.