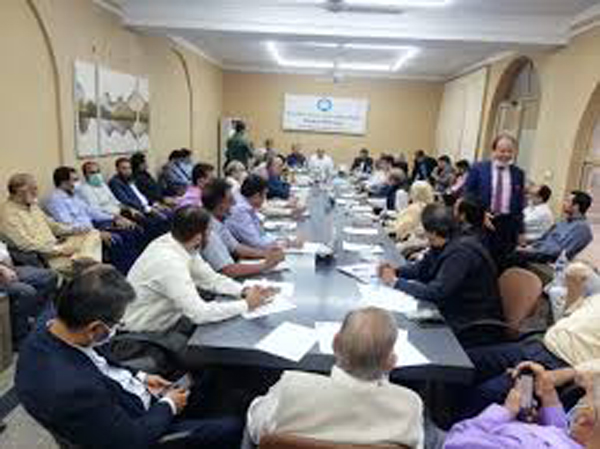 The Pakistan Industrial and Traders Association Front (PIAF), on behalf of the whole business community, has condemned the republication of blasphemous caricatures in France and the Islamophobic remarks of French President, endorsing the call for a boycott of French products across the country.

The PIAF members in a meeting, presided over by its chairman Mian Nauman Kabir, also passed a resolution unanimously, saying that the French president has hurt the sentiments of billions of Muslims around the globe. The meeting was also attended by FPCCI President Mian Anjum Nisar, LCCI former president Irfan Iqbal Sheikh and PIAF vice chairman Javed Siddiqi.

The resolution stated that no Muslim can tolerate profanity against the Holy Prophet (PBUH). The resolution further said that publication of blasphemous caricatures and the statement of the French president had hurt Muslims and urged the international community to play its role in preventing such actions.

Mian Nauman Kabir condemned the publication of blasphemous sketches and the Islamophobic comments later made by French President Macron. He appealed the fellow businessmen to remove French products from their shops in protest until France apologises to the Muslim world.

The PIAF, on behalf of the whole business community, strongly condemn equating Islam with terrorism, which is being done for narrow electoral and political gains, he said, adding that such provocative statements and actions fanned hatred, hostility and confrontation, imperiling efforts for harmony among various segments of society.

PIAF chairman said that freedom of expression should not be misused as means to attack or hurt public sentiments or religious beliefs and fan inter-religious hatred. At a time of rising racism, intolerance and populism there was a need for promoting harmony among peoples and communities, he added.

He stated that Turkish President is right in saying that the French president is mentally unbalanced. He said that the sanctity of the Prophet (PBUH) was important to the Muslims more than their lives. He said that the majority of the people of France do not support Macron. He demanded of the Organization of the Islamic Cooperation to immediate notice of the issue. He said that irresponsible statement of the French president has added fuel to the fire, saying nobody has the right to hurt the sentiments of millions of Muslims under the garb of freedom of expression. He warned that the seeds of hate being sowed today would polarize the society and have serious consequences.